May 2016 Survivor of the Month – Lindsey Wirht 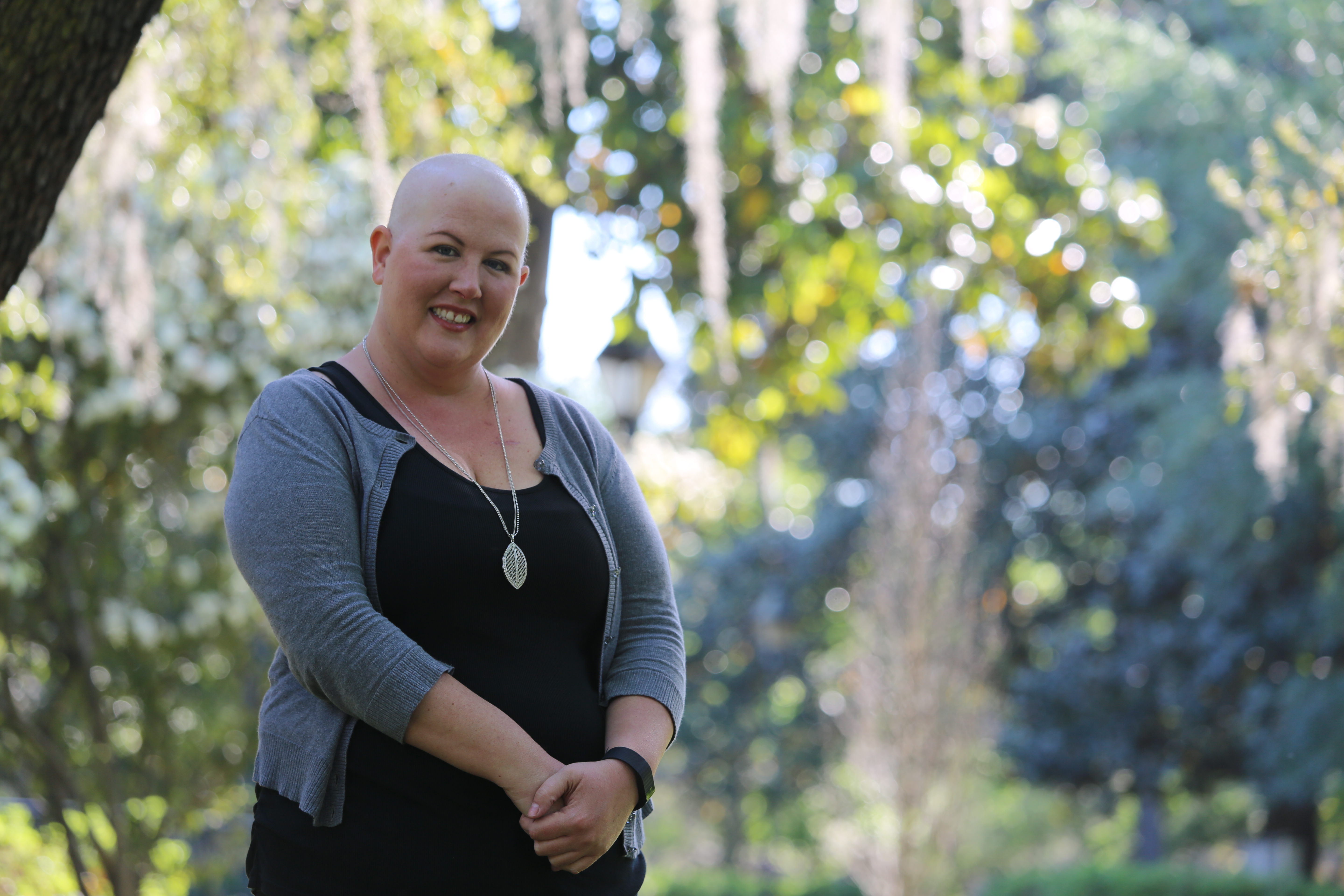 This is Lindsey Wirht’s story. I believe it is important to share her story in her words as breast cancer is so sneaky and comes in all kinds of disguises.  We must all be aware of our own bodies and seek professional guidance because knowing is half the battle in life! Lindsey did attend the Survivor Reception on Friday, April 15th, 2016 in Ellis Square and was looking exceptionally beautiful while being escorted by one of our U.S. Marines to the podium for her introduction. On Saturday, April 16th, 2016 she bravely crossed the finish line of the 5K Survivor Walk in the 8th annual Susan G. Komen Race for the Cure. She is a brave young wife, mother and now Survivor!

In October of 2015, I started having issues with my right breast. I had some dryness that would not go away, I thought it was eczema. I have sensitive skin. So I slathered on all kinds of creams. It would get better then worse again. In November, it started itching. It never occurred to me it might be breast cancer. It didn’t run in my family, I was 38yrs old, I nursed my son for 2 years. So still was just thinking it was a skin issue. In December, I finally called my GYN but because of the holidays, I wasn’t able to be seen until January of this year, 2016. A friend suggested that I go to a local Dr. in Rincon. At this point, I had developed some red blotches on my breast and a small lump. I went in and was prescribed an antibiotic and steroids. They thought maybe it was just an infection of some kind. I finished my medicine and it had not helped, if anything it was worse. So I went back and asked the Dr. to just humor me with a mammogram. I had googled itchy nipple and the first thing that pops up was breast cancer. I went to Telfair Women’s Center the following week for a mammogram, the technician immediately said she needed to do an ultrasound. For an hour, I was laying there thinking this is crazy, nothing is wrong, why is this taking so long. Shortly after I finished dressing the nurse asked me to come on back for the Dr. to talk to me. They said they saw some areas of concern, could I please come back first thing in the morning they would like to do a needle guided biopsy.
I went in for my biopsy and waited 5 days for someone to call. My husband and I went in for my results. They said the biopsy picked up some cancer cells and it seemed to be a small localized area. At this point, I am thinking ok. No big deal! We caught this early, I will be fine. About a week later we have an appointment with my breast surgeon. She tells us that I have Stage 3 Inflammatory Breast Cancer. Immediately I am in shock! How did a small area become stage 3 cancer?! I have a rare kind of breast cancer. It affects 1 in 200,000 women. Most women are not properly diagnosed until it has spread to other areas. IBC is very aggressive. It is different because it is in our tissue. It is commonly misdiagnosed as mastitis or cellulitis. I am so very thankful that I pushed for a mammogram! Being my own advocate potentially saved my life. Once women are diagnosed with IBC we are automatically stage 3 because of the fact that it is so aggressive.

I cried for the first few days. It was so surreal. It didn’t seem like this was real life. It was my son’s 3rd birthday. A week from my 39th birthday. I have been dreading turning 40 and now it is the only thing I dream about. I have 2 little boys, an amazing husband. I have to fight this! I have to win this battle. The idea of not seeing my boys grow up terrifies me. I started my first round of chemo on Feb 15th. I know I have a long road ahead of me. But I am ready for the challenge. I am confident that I can beat this. My biggest concern is that IBC survivors have a 60% risk of recurrence within the first year. An average of 5yrs life expectancy after diagnosis. Those are scary numbers. But I am a fighter! I never give up! Those words are not in my vocabulary!

I immediately told everyone. It never occurred to me to not tell people what I was going through. My family and friends have been so amazing and supportive. I believe that if I could just help one woman with my story then it is all worth it. Because IBC often does not have a lump, I had no clue this type of breast cancer even existed. Now I am spreading the word like crazy. Several friends have even gone for mammograms in my honor. I’ve even had several women in our community reach out to me that have had breast cancer and this has been a great support.