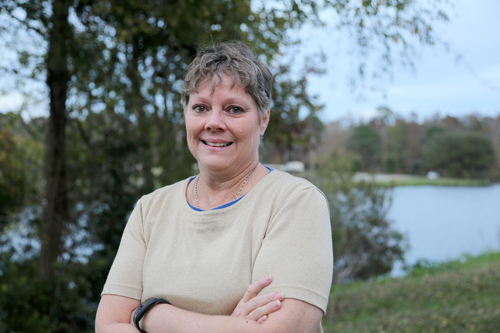 Far from the bustle of Broughton Street and the regular racket of the river, there is a quiet little town called Ellabell, that Donna McKissick calls her home.  It is a half-acre haven, eighty miles from where she works, which offers her refuge from the daily grind.  With screeching tires and sirens replaced by the sounds of cicadas, and far-removed from the ever-present glow of city lights, Donna loves to relax watching the moon and the stars shine like brilliant paint spatters on a charcoal canvas.  This quiet country home is a place where she can read and do crafts, dream of her next trip to see her grandchildren, and of course, care for her “babies,” the dozen vibrant orchids that she cherishes.

But despite her tranquil surroundings, Donna’s life has not always been an easy journey.  A little more than two years ago, a diagnosis of breast cancer would change the trajectory of her life forever.  There would be hard times, painful treatments, and moments of despair.  But through her journey, Donna would find strength she never knew that she possessed.  Above all, she would learn that survivors, much like her beloved orchids, are always in bloom.

“I was just your typical 54 year old single female. I had a M-F job, went to church on Sundays, spent time with my mother, and visited with my grandchildren every chance I got. I took my health for granted and probably thought I was invincible.”  The threat of breast cancer was nothing new in Donna’s life, her mother a 16-year survivor, and she herself having a few scares in the past.  Donna has always tried to be proactive with her health, but best intentions can be easy to set aside when realities of life come into play.  “I had always been really good about getting my mammograms and yearly check-ups, but there were a few years where my insurance didn’t pay for well-care and I didn’t know about the services available.”  One day at a routine check-up with her doctor, he asked her if she had scheduled a mammogram.  “I told him l couldn’t afford it, and he said, ‘Well, can you afford cancer?’ Those words have come back to haunt me!”

The financial burdens of healthcare are real and remain an enormous obstacle for those in our community to get the care that they need.  What Donna didn’t know at the time is that this is where organizations like Susan G. Komen come in, funding local programs that provide access to care for men and women who may not be able to pay for necessary treatment and screenings.  To-date, more than a hundres people have had treatable breast cancers detected because of the support that they received from Susan G. Komen of Coastal Georgia.

In 2013, a few years after her encounter with the doctor, Donna would schedule another routine check-up, this time also scheduling a mammogram.  Despite her family history, the prospect of having breast cancer was still far from her mind during the exam.  “During the test, the tech was visibly upset, but I was just worried about getting back to work!”  Donna would have more tests and then a week later, just as summer was turning to fall, she would receive a call to come to her doctor’s office.  There she would learn of her diagnosis and begin a dizzying circuit of appointments.  “I was diagnosed with Stage 2 Invasive Lobular Carcinoma. It happened so fast…the next few days were just a blur.”

As the air began to chill in late October, winter resting on an approaching horizon, Donna would learn that she would need to have chemotherapy as a part of her treatment.  Like the steady rain that Savannah receives instead of snowfall, sometimes bad news comes in torrents.  Having just learned this troubling news, and on the phone seeking advice from a friend, Donna would arrive at her home to discover that it had been burglarized.  But this was not the end.  “Two weeks later, while I was at the center having chemo, I learned that my house had been broken into a second time and totally ransacked.  I think it was at this point that I actually fell apart.  How could this be happening?  Why was God so mad at me?”

In times of great trial, there is often a turning point when a person looks defeat in the face, and for a moment, the future hangs in the balance.  This was Donna’s moment.  She had been knocked down, but was determined to get back up.  In this flash of darkness her courage would shine through as brightly as the stars that she admires in that Ellabell sky.  “I quickly realized that my house and its possessions were just material things and I was in a fight for my life.  I had two choices, I could fight or I could die.  It was then that I decided that I was going to fight this with all my being and kill this beast.  I packed my bags and moved to my mom’s for the next four months and I am so thankful that she was able to take care of me.”

Before cancer, Donna liked to make the long drive to work with the top down on her convertible, the wind blowing through her brown hair.  Those days would soon feel like a distant memory, as the car began to give her problems and Donna’s hair began to fall out.  Many would take such news as a reason to lose heart, but not Donna.  “About a week after my first chemo, my hair started falling out, so I asked a barber friend of mine if he would shave my head.  My mom and my friend, Cissy, went with me and we turned it into a party.  My friends all got together and gave me a ‘hat’ party.”

Donna’s treatment would consist of 14 rounds of chemotherapy, surgery, and 15 separate doses of radiation.  However, she would soon discover that the painful treatments are just one part of the bitter fight against this disease.  “Those 8 months had been a whirlwind with treatments, doctor visits, surgery, hospitals… so that when it was all over, I felt lost.  I think it was then that the depression hit and the anxiety started.  My body hurt from the chemo, I had no energy and I was so very tired… I knew that if I sat around doing nothing that I would begin to feel sorry for myself.  I didn’t want this to happen, and although it became a real struggle to get up in the morning and go to work, I made myself do it.”

Upon the advice of a fellow survivor, Donna would enroll in a workout program specifically designed to help adjust to a life after cancer.  It was a routine that began her return to a normal life.  “Meeting twice a week, same day, same time, same faces gave me the accountability and structure that I had been missing.”

Donna would also begin to research what other types of support existed, not only for herself, but so that she could pass it on to others.  “Often times, after treatment, all that is left are the scars and financial burdens. I was not aware of the many programs offered to cancer patients. After my diagnosis, I began looking for resources and financial help that was available…  Now, whenever I hear of someone who is newly diagnosed, I send them a list of all available resources and try to be a supportive person for them. The biggest piece of advice I could give anyone beginning this journey is to remember that there is a light at the end of the tunnel and it gets brighter every day.  This was what kept me going.”

Donna’s story, like that of any survivor, does not end with her final treatment.  Because of the courage that she had to fight, there will be more good days.  There will be trips to Perry and to Lexington to see grandchildren.  There will be ball games and gymnastics meets to watch and games of Bunco to play, and someday soon there will be more convertible rides with the top down.  Because she chose not to give up when it mattered most, Donna’s future will be as bright and hopeful as those orchids that she adores.