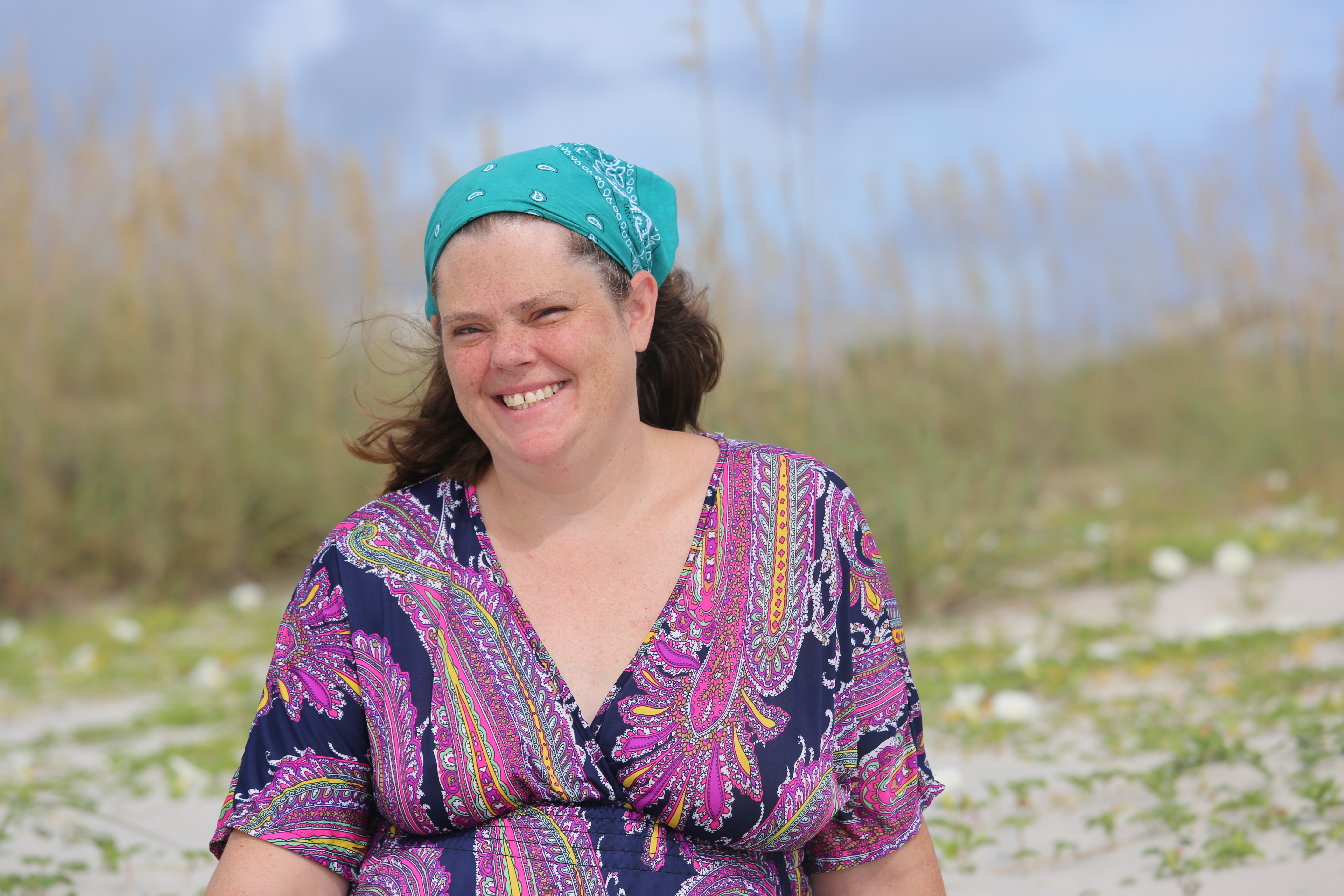 Far from the sprawling salt marshes and the low lying lands of Coastal Georgia, there is a place in the shadow of the Rocky Mountains that Abigail Norton once called home.  A native of Colorado, Abigail grew up with a love of the outdoors and a passion for creativity.  She moved to Savannah in 2002 to pursue a graduate degree, the next step in the dream of building a career in illustration.  However after completing her degree, the life that she and her fiancé had begun to plan together would soon meet an unexpected obstacle when Abigail discovered a lump in her breast.  Over the next several years, she would learn that some mountains are not meant to be climbed or drawn; they must simply be endured with a sense of humor, hope, and courage.

“I was born and raised in Colorado. I grew up camping, fishing, sledding, tubing, and most things outdoors.  I grew up with a big extended family… family is super important to me.”  Art was something else that had always been a passion, and Abigail’s love of it would draw her to Pueblo, Colorado, where she would earn a bachelor’s degree in fine arts from Colorado State.  She would take a year away from school before deciding to continue her education at the Savannah College of Art and Design.  “I finished my degree in 2006.  I was going to move up north to pursue an illustration career… but I met Jeremy Norton before that.  We dated and were engaged in 2007…”  The two planned a wedding for the following September, but only a handful of months before that, the couple would learn devastating news.

“I found my lump myself.  My then physician…sent me to Telfair Pavilion for a mammogram and to her fellow physician… who later became my breast surgeon.  I was eventually diagnosed with stage 3 triple negative invasive ductal carcinoma.  It was my thirtieth and a half birthday present to myself.”  While it is routine for doctors to recommend annual mammograms for those over forty, Abigail’s story is a reminder that breast cancer can strike at any time.  It is important for those of all ages to be aware of their breast health and perform regular self-exams.

The next several months of Abigail’s life would become a blur of appointments and treatment sessions as her doctors put together an aggressive plan of attack against the disease.  “I had a right side lumpectomy, removal of 40 lymph nodes (12 of which we’re malignant), and a port-a-cat was placed.  I then went on to chemotherapy and radiation.  My therapy ended in March 0f 2009.”  The pain of her treatment schedule was only one of the stresses that would weigh on Abigail’s mind.  She worried not only about how the aggressive therapies would impact her body in the short term, but she was also concerned how they would affect the family that she and Jeremy were planning in the future.  “Before treatment started there was discussion of fertility options, as treatment can cause infertility.  These options turned out to be too expensive.  My then fiancé and I agreed to let the universe tell us if kids would be possible after treatment.”

A battle with breast cancer is daunting and each person rises to the challenge in her own way.  Some use anger to channel an inner-fighter, others dedicate themselves to becoming experts of the disease, while many draw deeper into their faith.  How ever each survivor responds, the trait that seems most common among them is an unwavering sense of optimism.  It takes courage to find funny in the frightening, the tenderness amongst the terrifying.  When Abigail began to lose her hair, she and her friends found a way to make a joke about it, allowing her to laugh in a moment that makes many others cry.  She remembers the pain of the treatments, sure, but she also remembers the warmth of seeing the six-foot, three-inch frame of her fiancé curled into a ball and sleeping on a tiny loveseat so that she would not have to be alone during chemotherapy.

Abigail would also learn to find peace where should could and draw strength from those close to her.  “My friends were amazing, as were the ladies I met in my support group… I will never forget all of the medical staff I met along the way.  I spent a lot of time at the beach.  I admit I missed the mountains of Colorado but (I admired) the ocean (at) Tybee Island (and it) made treatment bearable.  I made it through.”

Cancer is but one chapter in the book of a survivor’s life.  Since her treatments, Abigail has turned the page to new and exciting things.  In September of 2009, a year after the originally scheduled date, Abigail and Jeremy would become married.  A year later, at a time known for revelry and celebration in Savannah, Abigail would have a different reason to be excited.  “Then I got a miracle notice on St. Patrick’s Day 2010.  I found out I was pregnant.  My first daughter Samantha was born November 14, 2010.  We we’re blessed again with a 2nd daughter, Jenifer on April 29, 2013.”

Abigail is grateful to have survived this disease, but is mindful that others have not been as fortunate as she has been.  “My perspective on death has changed.  In the end we all die and some of us will be taken much sooner than others.  It is sad when people we know and love die.  But what is important is to continue to live and not be drowned in grief… I have lost one cousin, Jenifer Aust, (diagnosed 6 months after me) and numerous friends to this disease.  I miss them every day and I am sad sometimes, but I live my life to the fullest to honor them and because life is precious and no one knows when their time will be over.”

In the end, Abigail has grown in many ways from her experience.  Both during her fight and now during her survivorship, she has learned to lean on others who have been a great source of support.  She has found the support through Susan G. Komen to be among the most impactful ways to connect with others.  “I wanted to give back to others.  I wanted to support fellow survivors.  I do this by participating in the race every year with other survivors.  This gives us time to spend together and connect… we give each other an outlet to talk about our fears and hardships.  It is always great to talk and support people who are or have been through exactly what you have been through.”

While the fight against breast cancer is a cause shared by many, it is ultimately a series of individual journeys that is each unique for the person and the families involved.  Abigail knows this well, and she shares that sentiment in the advice that she gives to others who follow a path that she has traveled herself.

“Cancer of any type is tough.  You have to be strong and you have to be willing to ask for help. Help is always available, even if you don’t have your own support structure.  You can find one in this community and they are amazing.  There is help with paying for treatment and medication, getting rides, scheduling appointments, cleaning, meals, a shoulder to cry on and hugs.  You have to do what is right for you… Remember you are never alone.”