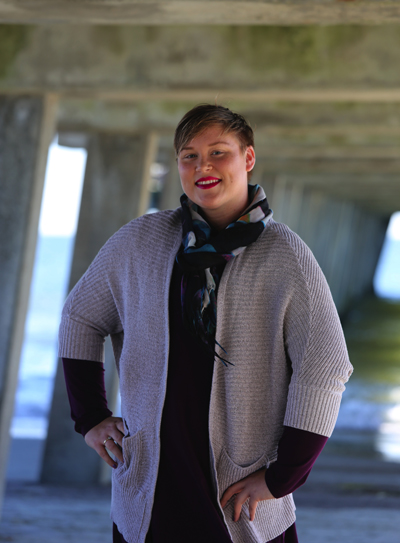 The morning air has a crispness that it lacked just a few weeks ago.  A summer of punishing heat and pounding rains feels like a distant memory, and on the ever-approaching horizon there is a new season waiting to be born.  Two years ago, Bryce Southers was anticipating a birth of another kind.  Bryce was eight months pregnant and eagerly anticipating the arrival of her first child.  But almost immediately after the birth of her son, Bryce would learn devastating news.  Twenty three years old and only a handful of years removed from her high school graduation, Bryce would be diagnosed with breast cancer.

In the years before her diagnosis, Bryce’s life was full of the whirlwind of change that comes with entering adulthood.  “My life before cancer was energetic and lively, like every person’s life should be in their early twenties!  I graduated high school in 2008, continued my education at Richard Bland College, where I received my Associates in Science in 2011.”  Degree in hand, Bryce made the decision to join the U.S. Army and signed her contract shortly after graduation.  After finishing her training, Bryce was stationed at Hunter Army Airfield in Savannah.  As if a new career and new place to call home wasn’t enough change, Bryce would experience an exciting change in her personal life as she awaited news of where her first assignment with the Army would take her.  “After arriving (in Savannah) I found out I was getting deployed… to Afghanistan as a newlywed!  That’s right! I got engaged and married in the same year.  My life had taken off at high speed at the age of 22, but it didn’t slow down there.”

Not long after their marriage, Bryce and her husband would learn that they would soon become parents and the two looked forward to continuing down the exciting path that they had begun.  However, the care-free rollercoaster that the young couple were riding upon would soon take a much unexpected turn when Bryce discovered a lump in her breast.  Her immediate concern was for the health of her child, and so she quickly made an appointment to have the lump examined.  “After getting the lump checked via ultra sound, the radiologist said he (had) some concern and would like to schedule a biopsy.  I wasn’t terrified at this point, just concerned and I didn’t want to tell people just yet because I didn’t want to worry anyone with the unknown.”

Cancer was no stranger to Bryce’s family, her parents each having battles with the disease years earlier.  But luckily for Bryce, courage was no stranger either, and the strength that she would learn through her mother’s fight would leave a lasting impression on her.  “My journey with breast cancer actually started when I was just 10 years old, when my mother was diagnosed at the age of forty with stage IV breast cancer.  I watched her lose all of her hair and I remember feeling so helpless as a child, while my mother was looking death in the face.”  Despite the seriousness of her diagnosis, Bryce’s mother would survive and today is a fifteen year survivor of the disease.  Her courage through the illness would serve as an example of strength that Bryce would later call upon during her own fight.

Two weeks after her first appointment, Bryce’s journey would take an unexpected turn when the doctor who was scheduled to perform the biopsy disagreed with her diagnosis, and decided to postpone the procedure pending the results of a follow up six weeks later.  “That scared me.  I was already scheduled (for the biopsy) and he knew my family history of breast cancer… He came in and looked at the lump via sonogram once again, but said it was only a clogged milk duct and that I was too young to have cancer… so he gave me a 6 week check-up and sent me on my way.”

Bryce was surprised by the doctor’s decision, but eight months along and facing a litany of separate health concerns with her pregnancy, she found herself at a loss for what to do.  “At this point, I wanted to believe the doctor because I didn’t want to do treatment while pregnant, at the same time I still thought I needed the biopsy for assurance.”

Bryce’s story is a good example of how doctors can at times have differing opinions.  Instinct can be a valuable ally in times like these, and no one should ever be afraid to seek a second opinion.  Bryce decided to follow the doctor’s orders and focused her attention to bringing her baby into the world.  On August 6, 2013, Bryce and her husband’s blessing would arrive in the form of an 8 pound, 11 ounce baby boy.

Despite the elation that came with the arrival of her first child, the shadow of her upcoming appointment still loomed in Bryce’s thoughts.  “About a month and a half after I delivered my son, I went for my scheduled follow up appointment.  As I anxiously watched, the third doctor look at my lump on the sonogram machine.  He told me it (looked) as if it (had) gotten bigger and, we (needed) to now follow through with the biopsy.”  The doctor completed the procedure and then came the anxious wait for the results.

On October 1st, after a few missed calls back and forth, Bryce would receive a call from the hospital asking her to come in to see a surgeon.  In her heart, Bryce could feel that something was wrong, and as she scheduled the appointment she began to prepare herself for the worst.  “In that moment I somehow knew it was malignant.  When I heard the words that confirmed my thoughts, it all became so real.”

Becoming a parent for the first time is a marathon like no other.  It is a joyful, but exhausting, ritual of sleep deprivation, emotional extremes, and never before imagined challenges.  On top of these obstacles, Bryce would learn to incorporate the painful realities of a fight with breast cancer.  Her treatments have included multiple surgeries, 16 rounds of chemotherapy, and 32 separate radiation treatments.  She is just a few weeks removed from having a right mastectomy and is still in the process of healing.  Even with scars still so fresh from her fight, Bryce has been eager to give back to the community to help others battling this terrible disease.

Bryce has found a way to develop those relationships by connecting through Susan G. Komen.  “As a survivor of breast cancer, I have been trying to be very active in the breast cancer community and spread my story and my knowledge to whomever I can.  My first Komen event as a survivor was in April of 2013… I remember people coming up to me saying how there was not a dry eye in the park that day, as I went on stage with my bald head and my then 7 month old son and told them my name and how old I was (24) and how I couldn’t have made it through without him!”

As Bryce continues on her fight, she has learned much from her experiences that she carries with her to this day.  She is determined not to focus on the steps along the way that have been difficult, but rather to embrace what she has learned from taking them.  “My journey has changed my life and my perspective on life for the better. It has taught me some of the most precious life lessons, introduced me to a network of people that I would have never met if it weren’t for breast cancer.  Anything can happen to anyone at any moment, so never take life for granted.”