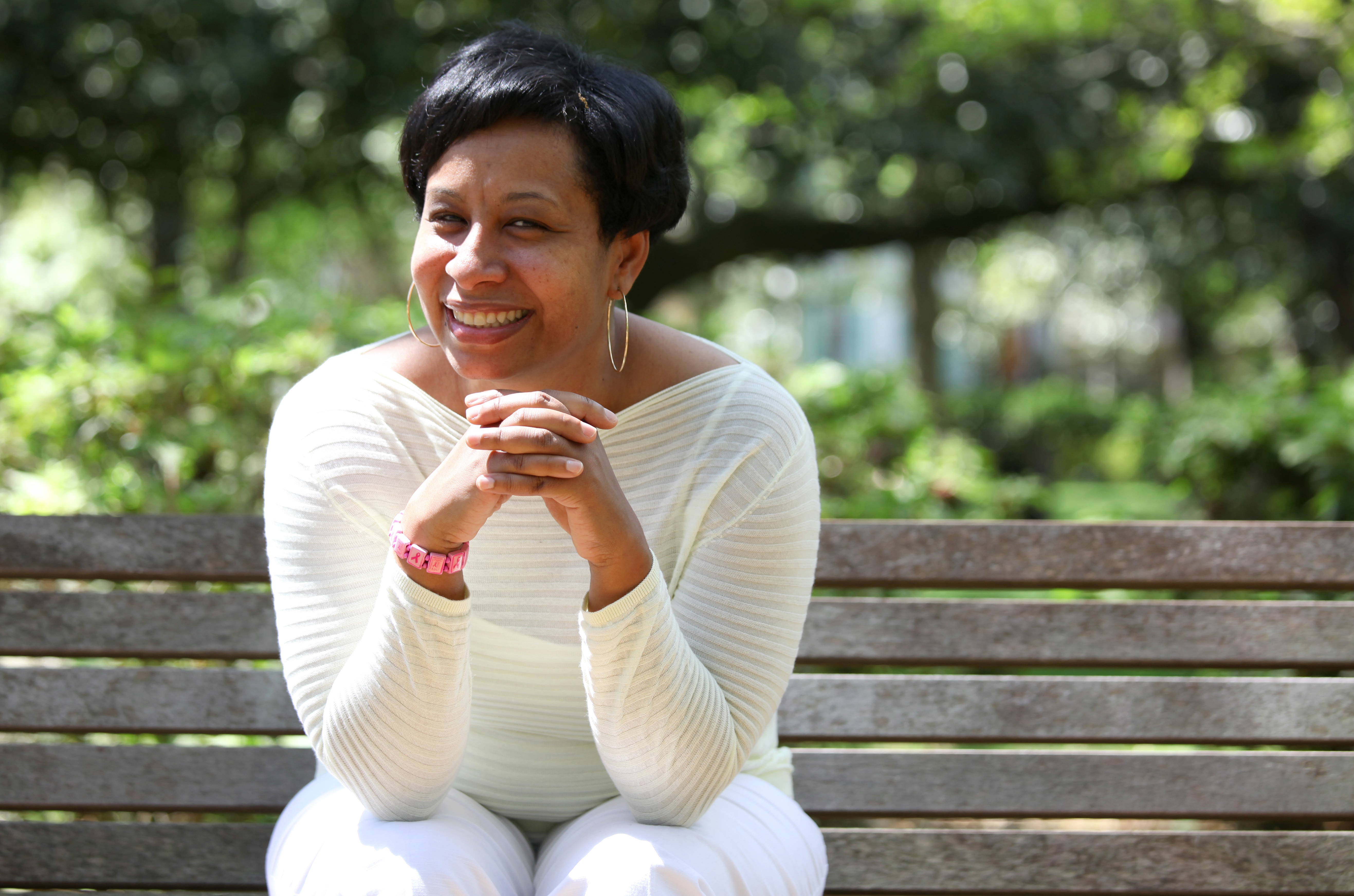 At a crossroads of time, between the last whispering gasps of winter and the steady steam of a Savannah summer, we find the humble month of May.  It is a hopeful time, full of flowering dogwoods and the last few starbursts of azalea blossoms.  Hope comes in many forms, from the simple wish for pleasant weather, to something far more significant and enduring.  May’s Survivor of the Month, Zeleekha Jenkins-Strong, knows firsthand about the importance of hope and the power of courage.  In the spring of 2013, Zeleekha would make a discovery that would change her life and perspective forever.

In March of 2013, Zeleekha discovered a lump in her right breast while performing a self-exam in her home.  “I didn’t think it was cancer because a few years back I had a fibroadenoma (benign tumor) removed from the right breast.  I had my annual physical and breast exam in May 2012 and everything was normal.”  Despite her belief that everything would be fine, Zeleekha followed her instincts and scheduled an appointment with her doctor for a few days later.  The doctor would examine the lump and order a diagnostic mammogram before delivering the difficult news.  “I never would’ve thought in a million years I would hear the words ‘In my professional opinion, I feel you have breast cancer.’  I had a biopsy the next day. I was extremely frightened and in a state of shock.”  Soon afterwards, on April 2nd, Zeleekha would receive the pathology results that would confirm the doctor’s suspicions.

As challenging as it was, the decision to follow her initial instincts to have the lump checked by a doctor was very important in Zeleekha’s cancer being discovered quickly.  Early detection is one of the most critical factors in determining the success of treatment, and too often, patients ignore or easily dismiss warning signs that might help diagnose the disease before it has the chance to spread.  But Zeleekha believes that it was more than just chance that compelled her to take action.  “I believe the thought I had that led me to check my breasts that day was God and my grandmother protecting me.”

Detecting breast cancer early certainly does not imply that the treatments will be easy, and Zeleekha’s journey was filled with painful challenges.  Only 36 years old at the time, she opted to have a right breast mastectomy, followed by four rounds of chemotherapy and 25 radiation treatments.  However, Zeleekha does not dwell on the difficult parts of her fight, but has learned to appreciate the support that she received.  “I’m so grateful for the doctors that were placed in my life to help me along my journey.  I had an enormous amount of support from family, co-workers, support group, and friends.”

It is one thing to survive a fight with breast cancer, but it is another to take that experience and allow it to change the person who you are in a positive way.  Zeleekha has chosen to use her experience as a reminder to appreciate the things in her life that she may have once thought of as routine.  “I cherish each precious moment God allows me (to have) with my loving husband and precious children.  I laugh a lot.  I travel, which is something I didn’t do as much before cancer.  I don’t take life for granted.”  The grace with which Zeleekha faced these challenges is inspiring and a testament to her character and faith.  It is also a friendly reminder that when looking for an example of strength, one needs look no further than a person whose name is Strong.

Through her journey, Zeleekha has also learned about the important role that survivors play in helping those facing the challenges of breast cancer.  She has found a rewarding opportunity to connect with other survivors through Susan G. Komen.  “After my diagnosis, I felt isolated. I didn’t know what to expect.  Once I connected with other women who experienced a diagnosis of breast cancer, I realized I wasn’t alone.  The support helped me cope with the emotional aspects of cancer by providing a safe place for me to cry and express my feelings.”  Zeleekha also recognizes the powerful voice that a survivor carries, and has chosen to use her voice to advocate for those facing a similar fight.  “I would like to encourage people to perform their monthly self-breast exams and keep up with their yearly mammogram and physical.  If a lump is found, don’t be afraid to schedule an appointment with the doctor immediately.  Take care of yourself by eating healthy and reducing stress.  Be your own advocate. If you feel something isn’t right, go along with that feeling and express it to your doctor.”

As the blessings of May, from the flowering plants to the cool evening breezes, are swept away by the summer heat, we must remember to enjoy the moment and look forward to the new season to come.  Zeleekha is proof that the spirit of a survivor lives forever.  Because we have hope, there will always be spring.