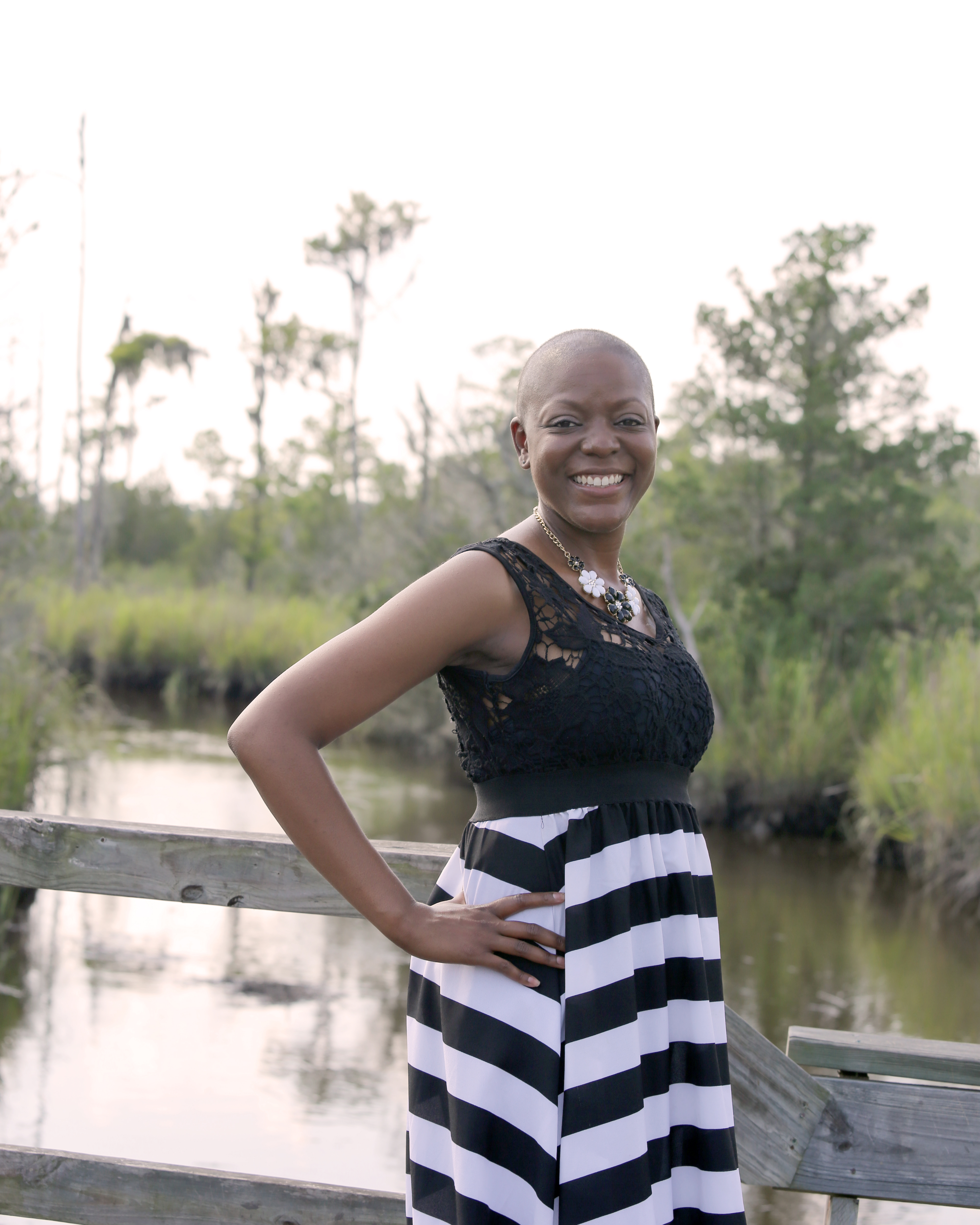 Sometimes, there are simply no words that will suffice.  We try as best we can to describe the things that we see and the people who we meet, only to be let down when once-powerful ideas have been diluted by time and hyperbole, and left crumbled into clichés.  But then one meets a person like Yolanda Kenney, and suddenly words like hope, passion, courage, and resilience suddenly take on new meaning.  Yolanda is currently battling stage four breast cancer, and though some of her days are full of painful challenges, she has chosen to fight with a sense of grace and optimism that is truly breath-taking.

“My life before cancer, believe it or not, was really a simple life.  My personal interests always included my daughter.  I lived for my child.  I enjoyed the simple things in life, such as going to beach, shopping and long walks.  I also enjoyed spending time with family and friends.”  At 28 years old, the notion that she could get cancer was not something that Yolanda thought much about, despite the fact that she had several people close to her recently battle the disease.  All of that would change in the spring of 2008, when Yolanda discovered a lump during a routine self-exam.   “I had close family members and friends go through chemo.  Never did I believe that it (would) touch as close as my own breast.  I have always believed that everything happens for a reason, now it’s time to find out the reason.”

Yolanda immediately scheduled an appointment to follow up with her doctor, however due to the fact that Yolanda was much younger than the typical at-risk patient, the doctor was initially dismissive of the possibility that it would be cancer.   “I fought to get it checked and the doctor agreed on a biopsy, while telling me that it was unnecessary.  The biopsy came back positive.  I was first diagnosed with stage Ill breast cancer in March 2008.”  Yolanda’s story highlights two very important things to remember.  While there are certainly factors that increase the likelihood of a positive diagnosis, breast cancer, can strike at any age without warning.  Secondly, a person’s instincts are often their most useful ally when facing health issues.  It is important to always follow what your senses tell you, and never dismiss your instincts if something doesn’t feel right.  Because Yolanda became her own advocate and fought to have the tests that she felt that she needed, her cancer was detected far earlier than it might have otherwise been.

This diagnosis would be neither the first nor the last time that Yolanda’s family would be forced into a fight against cancer.  It was a fact of which Yolanda was very aware.  “I had a really hard time informing my family because during this time my aunt was on hospice, because she had been diagnosed with breast cancer.  I had a bilateral mastectomy, chemo and radiation.  I lost my aunt during this time and realized that another aunt was diagnosed during my treatment.”  Hereditary patterns can often be a strong indication of an increased risk for breast cancer, and it is important that men and women alike take the time to become as acquainted as possible with their family medical history.  “Understand that breast cancer does not target a certain age.  I was 28 years old when I was first diagnosed.  Start breast examination and breast health as soon as possible, especially if you have a family history of cancer.  Early detection really does save lives.”

Some people would have faced such a daunting challenge and crumbed under the weight of its impact.  Some people would have simply slipped back into their normal routines or become disenchanted by their misfortune.  But, Yolanda Kenney is not some people.  For her, the ordeal that she had just been through was an awakening.  She emerged from her bout with cancer, victorious and determined to live the next chapter of her life on her terms.  “During this time I realized that I had not lived my life like I should have.  I learned to enjoy life.  During this time, nothing waited until tomorrow.  I learned how to ice skate, I took a trip to the Bahamas and I went to New Orleans.  All of these were things that I had put off.”

Yolanda had been reborn by her experiences and took each day as it came, but sometimes fate can be a cruel bedfellow, and seven years after her initial diagnosis, Yolanda would once again be faced with disheartening news.  “Just when I thought that I was living to my fullest, I got diagnosed with stage four breast cancer in December 2013, while with family in Albany, GA.  I was told that I would be put on hospice because there were no more options.  I called back to Savannah, GA to inform my oncologist… of the information from which I was told.”

In January of 2014, Yolanda began an intense treatment schedule to combat the disease, including multiple rounds of chemotherapy.  In September of last year, her oncologist, encouraged by the progress, reduced her treatment schedule, but continues to treat the aggressive cancer to this day.  At an age when many young people are just entering the prime of their lives, Yolanda is staring down a life-threatening illness for the second time.  “I am currently 35 years old and on my fourth round of chemo.  I have strong faith in God and I believe that I will be fine.  I smile everyday through the pain. People ask me why, and I tell them that I like to keep them guessing, and upset the Devil.”

Rather than using her misfortune as an excuse to give up or to get down, Yolanda has embraced this chapter of her life with the same passion and optimism that she has always has.  “The phrase that I live by to help me get through my days is, ‘Good, better, best.  Never let it rest, until your good is your better and your better is your best.’  Which means to me, that there are no bad days, only good days that get better and some of those better days will be the best days that you have ever seen.”

Courage is a word that is often tossed around so effortlessly in our everyday lives that it sometimes loses its meaning.  Courage is not found on ball fields or in boardrooms, it radiates from the heart of a person who refuses to give in, no matter what the costs.  A hero is a person who endures whatever comes their way, only to inspire you to ask things of yourself that you have never before dared.  When destiny hands me the greatest challenge of my life, will I have the strength that it takes to persevere?

Yolanda is a hero in every sense of the word, and she answers this question every day with a resounding passion.  She is determined to not only beat this disease but to do so in a way that inspires and uplifts others.  She has learned from her past experiences and continues this fight armed with a knowledge that no illness can ever take away.

Cancer picked the wrong lady to mess with this time.