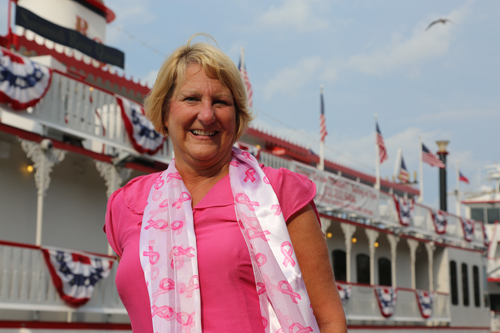 In a warm August breeze, an American flag dances to a song that only a handful have ever really heard.  The flowing stripes and stars are a powerful display; familiar to all, but sacred to only a special few.  An American soldier, the sworn protector of our homes and our freedoms, is among the most inspiring symbols that our culture embraces; an emblem of valor for all to admire.  Mary Carothers, a 29 year veteran of the Army, knows this well.  She also knows that courage can be found in the most unexpected of places, from the scorching sands of the Persian Gulf, to the sterile hallways of a hospital ward.  Mary also knows that there is perhaps no more perfect portrait of heroism than a soldier… with the possible exception of a survivor.

2008 was a busy time for Mary and her family.  An active duty member of the Army, she was stationed in Honolulu and was kept busy by the demands of being an officer, as well as a full-time wife, and mother to three teenaged sons.  But above the normal push and pull of a daily routine, Mary was going through a period of very significant and emotional changes, as she and her family were approaching a life-changing crossroads.  Mary’s husband, also a longtime veteran of the Army, was approaching retirement, and the family would need to decide what the next chapter of their lives would look like.  In August, they made the decision that her husband would retire and move to South Carolina to begin a new career and to start the process of building a new home on family land.

The decision of how to start their new lives after retirement was just one of the many challenges that the Carothers would face.  Soon after her return from Iraq in 2006, Mary’s life would take a number of unexpected turns, ranging from everyday stress to unpredicted tragedy.  “Upon my return, I lost a good friend from my deployment, started a new military job, and I had a few medical issues that needed attention.  My oldest son was dropped off at West Point in June of 2008, (and) my mother passed away unexpectedly the same month.”

The strain of any one of these events could be enough to leave someone reeling in despair, but Mary’s tribulation was just beginning.  Just a month after they made the decision for her husband to return stateside, Mary would get again unexpected news.  “An annual mammogram is the way my cancer was first discovered.  My original diagnosis was Stage 0-1 ductal carcinoma in situ.  I was scheduled to have a lumpectomy and radiation, but when they did the surgery, cancer was found in my lymph nodes.  My status advanced me to Stage III ER/HER2 positive.”  The involvement of the cancer in Mary’s lymph nodes significantly complicated her diagnosis and her treatment schedule.  As she prepared for more surgery and the specter of grueling procedures ahead, she did not hang her head in pity, but rather preserved the way that a soldier always does.  “Being in the military teaches us to be resilient, so this plan gave me something to focus on and allowed me the peace of mind to know that my future would be on the right track.  All I had to do was survive Stage 3 breast cancer!”

The soldier does indeed embody a different breed of toughness, but that is not to say that the challenges that Mary would face would be easy.  It has been said that courage is not the absence of fear, but rather the ability to conquer it.  During this time in her life, Mary was a model for this ideal.  “With the first diagnosis I told myself, ‘I (can) get through this.’ I was a tough Army officer, but with the second diagnosis I was devastated.  As tough as I was, I knew it was going to be a difficult road ahead.”

Following her mastectomy, Mary would begin a treatment schedule of radiation and chemotherapy that would simply become a part of her routine, nestled in between being a mother and still working hard for the nation that she loves.  “I was entered into a clinical trial of less chemotherapy medicine but more often (once a week) for the next six months. I also needed 33 working days of radiation.  I worked full time at Pacific Command in Honolulu, Hawaii, during my chemotherapy and radiation treatments.  Some days I would leave work early if I wasn’t feeling well.”

During this time, Mary would draw support from those close to her to help her through the challenging days.  “My neighbors kicked in gear to help me get through the treatments. One was a nurse and showed me how to fill the needle for my daily shots. Another drove me when the treatment required Benadryl and made me sleepy. A third made dinner for my boys on my treatment days! Very special ladies entered my life because of breast cancer.”

The ability to endure major operations and painful treatments is a testament to a person’s resolve.  The choice to do so with a sense of optimism and faith is a testament to a person’s character.  “My faith allowed me to rationalize my future by telling me this was happening for a reason.  I worked hard to find the silver lining.  My deployment to Iraq and my mother’s passing in the year before my diagnosis had made me tough.  I found the silver lining in that my children had become independent from my deployment and my mother was a woman who overcame many tragic events.  So I had to drive on and strive to live life to the fullest.”

It was not long before Mary began to feel the calling of a new duty, the need to support others who are facing the same challenges that she did as a cancer patient.  “I finally got to Georgia/SC in October of 2009.  In addition to finishing my treatment, reconstruction surgery, retiring from the Army, finding civilian work, and settling into my new home, I was eager to give back and help others with their journey.”

While, her busy schedule would not always allow her a lot of free time, Mary would become involved with the Savannah Affiliate of Susan G. Komen and use the time that she had to connect to a sorority of survivors to help where she could.  “I didn’t have a lot of time to volunteer, but I met some wonderful survivors that got me involved.  Every year I participate in the Komen Race for the Cure as part of the “Marshmellow Team,” and I join in on the other survivor activities.  There is a special relationship between survivors because we are all fighters!”

Mary Carothers, soldier, survivor and inspiration to others, has taken the opportunity to grow from these experiences.  “The silver lining in my breast cancer journey was that you don’t realize how tough you are from the many life experiences you have had until you face all of the challenges that breast cancer brings.  It is then you realize how badly you want to live.”  She hopes that her story can help others facing challenges in their lives, a hope that she passes along in her parting advice.

“If you have faith in God, strong family and friend support, and the will to live, you can get through breast cancer.  You do have to realize that you can’t be super woman all of the time and after everything you need to find balance in your life.  You need to be selective about what you worry about, what you sign up for, and cherish the good relationships you have in your life.  Time on earth is short and we need to enjoy it!”