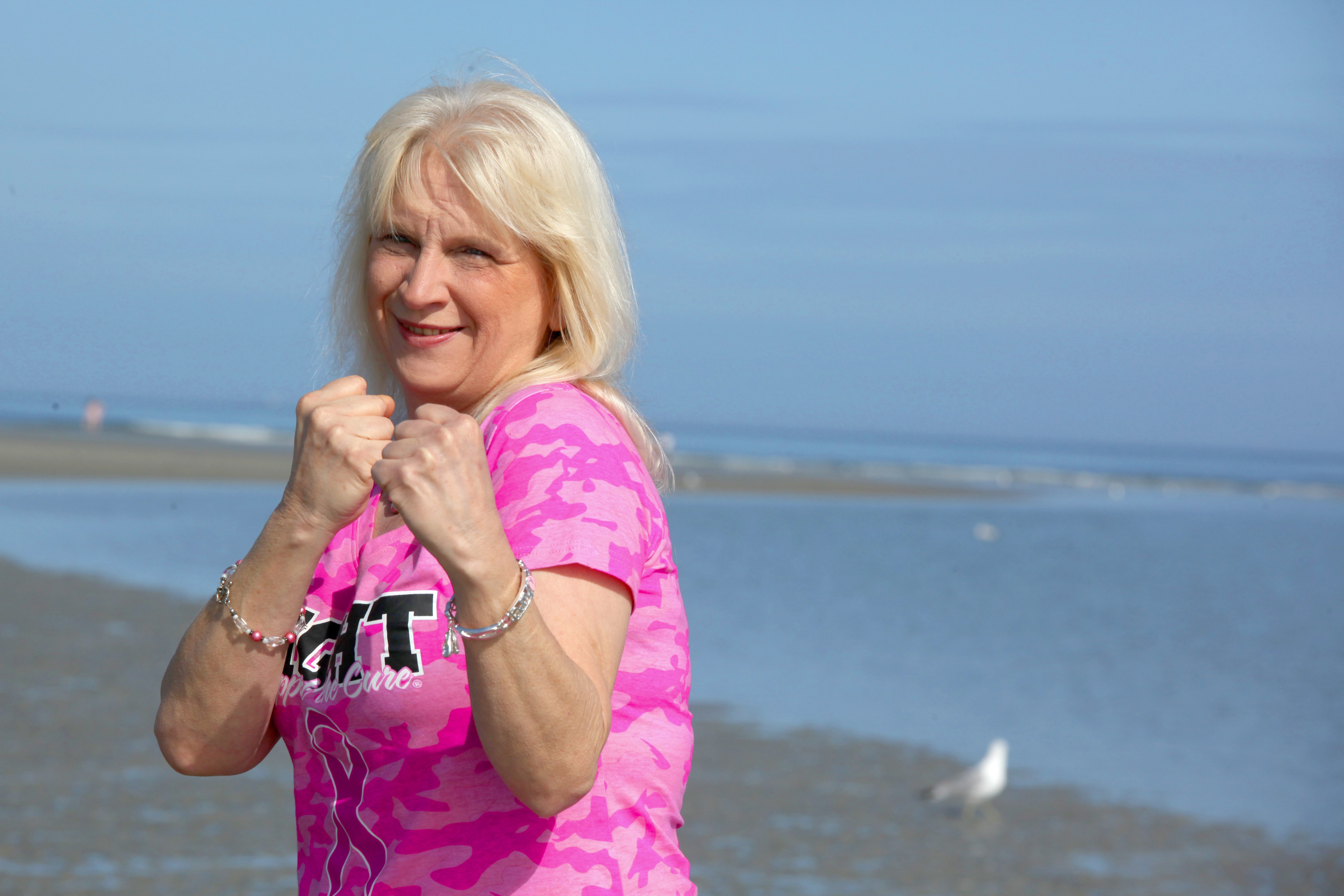 As dark clouds gather on a distant and ever-changing horizon, it is natural for people to react to their arrival in different ways.  Many will see impending doom, and the clouds themselves as harbingers of bad things to come.  Others, like April’s Survivor of the Month, Valicia Bess, know that without the occasional rainfall, one cannot truly appreciate the sunshine.  The ability to find optimism in adversity, faith in the face of the terrifying, is a blessing bestowed upon only the truly courageous.  The storm that was brewing for Valicia in the summer heat of 2010 was a battle with breast cancer.  While neither the full scope of her journey, nor the mettle of her character, can be fully described in a handful of paragraphs, the spirit of her courage can be found in an anonymous quotation that she has long held dear.  “Life is not about waiting for the storm to pass…but learning how to dance in the rain.”

In 2010, Valicia, like many of us with frenetic schedules, was busy with her normal routines and activities.  Breast cancer, or any other serious medical problem, was far away from her 47 year old mind.  Her life was full of the beautiful normalcy of day trips to the beach and spending time with family.  “Before I found out about having breast cancer, I never really thought about taking the time to conduct routine breast exams, including those that should be done monthly by myself.  I was always on the go, and never ‘made’ time for an illness or really concerned myself with my own health.”  Valicia is certainly not alone in this regard.  It is an easy thing to do to put one’s own health on the back burner when juggling the numerous demands of life.  Her story, however, does underscore the importance for people of all ages to incorporate screenings and healthy practices into a normal routine.

This is certainly not to say that Valicia was a stranger to the cruelty of cancer, her mother having passed away from a pancreatic form of the disease only four months prior her own diagnosis.  “I was diagnosed officially at the age of 47.  (I) had two mammograms done and the doctors suggested a biopsy.  Upon the results of the biopsy, it was confirmed that I had invasive ductile carcinoma, stage 2A. On August 23, 2010 my world came crashing down.”

Like many survivors, Valicia would learn to lean on those closest to her to draw strength for the upcoming fight.  “Through this journey I learned not to sweat the small things and enjoy every minute with my family. Without the constant love and support from my husband, kids, grand kids, and friends, I don’t think I would have mentally made it through this storm.”  It is natural for people to react differently when faced with times of great crisis, but the optimism and courage of a survivor will always shine through no matter how painful the challenges are.  The “small things” that Valicia referred to included: two operations, 25 physical therapy sessions, four rounds of chemotherapy, and 33 separate rounds of radiation.  Deep down, Valicia is not the kind of person who cowers from the storm, but rather one who hears a distant roll of thunder and instinctively reaches for her tap shoes.

Valicia’s journey has changed her perspective in many ways.  In one obvious way, it has renewed her commitments to her faith and family in a way that has given her strength.  “Breast cancer should not be a reason to give up on life… I saw it as a challenge and I knew God would never give me more than I could ever handle without him being at my side and carrying me through this difficult time.”  She also has learned firsthand of the powerful sorority of breast cancer survivors, and has vowed to do her part to give back.  “I just knew I had to fight with all of my might for my family, especially my grandchildren.  I knew that someday I would be giving the same support to a woman who needed exactly what I did at that time.  I learned to joke and laugh a lot, this helped me to cope with the situation tremendously.”

Valicia’s experiences have also helped her to become more aware of her personal wellness.  “My journey with breast cancer had definitely opened my eyes and now I make time to focus on my health.  Since going through all the treatments that (were) required, I find myself regularly doing self-examinations, going to the doctors for those check-ups, and I have even joined a gym to continue my journey for my health benefits.  I know I need to be around to watch all of my beautiful grandchildren grow.”

It has been a handful of years since Valicia’s journey began, and her experiences have changed her in a number of ways, both obvious and subtle.  Her story is a testament to all of us of the power of the human spirit and its ability to overcome tremendous adversity.  Above all, her journey is a reminder that the truly courageous know in their heart that when the sky begins to dim, and the winds begin to rise, there will always be a bit of sunshine waiting for us beyond the storm clouds at hand.