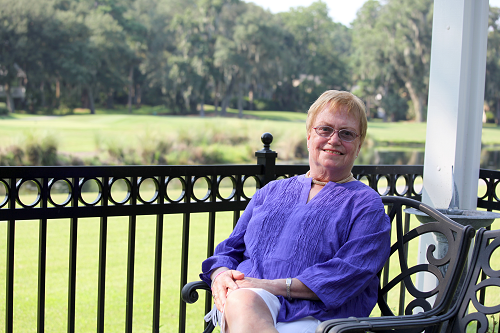 A simple moment to reflect can be a powerful, valuable friend for someone facing great challenges.  That moment of peace, alone with one’s thoughts, can be found in many places, from the rolling emerald fairways of a nearby golf course to the fluttering pages of a journal.  For those who face all that comes with a diagnosis of breast cancer, like September’s Survivor of the Month, Betty Stout, surviving is about making a connection with others as well as oneself.

As the leaves began to change color in the fall of 2008, Betty was beginning a new life.  Having just relocated to Coastal Georgia from the Northeast, her days were filled with creating new routines and familiarizing herself with the nuances of southern culture.  As a recent retiree from a career in business management, Betty was looking forward to beginning the next chapter of her life in a place that was far from the hardships of New England winters.  After a quick visit in the spring of 2008, Betty had made up her mind to make Savannah her new home.

“I immediately started being a ‘newcomer,’ doing all the things that a newcomer does: learning about southern living, exploring Savannah, settling into my new home, making many new friends, finding a walking group, learning how to play golf, getting to know my new church, seeing my first alligator, and using my GPS to go anywhere and everywhere. I was in retirement heaven.”

As she began the process of getting settled in to her new life, Betty also began to cross off the more routine errands on her list, like establishing herself with a dentist and new doctors in the area, as well as scheduling her annual mammogram.  Only a handful of months since her arrival, at a time of year when the azaleas bloom and the coastal breezes carry the last few weeks of spring, Betty would learn how different her new life would become.  Her heart, still heavy from the weight of recently losing her mother, would once again be tested as she learned that the results from her mammogram were “suspicious,” and would require a barrage of tests to follow up.  Betty would turn to her journal as way to capture her emotions as she began the greatest challenge of her life.

“I don’t quite know how to say what you go through when you get the words ‘breast cancer,’ and they (the doctors) mean you. I fell into total disbelief and at the same time knew that my life was changing at that instant forever.”

Betty’s journey would be wrought with challenges and obstacles to overcome.  She had been diagnosed with ductal carcinoma, and would begin the process of treatment that would be long and painful.  While her story is unique, the courage that Betty would embody is familiar to many who have faced great adversity and had the courage to overcome.  By her side through her struggles she kept her journal.

“Somehow with the help of many friends, my primary care physician (PCP), my church family, networking, asking many questions, etc. the ‘team’ of health care professionals that would take me through my mastectomy, chemotherapy, and reconstruction was formed.  In a very short time I was becoming an “expert” in a domain, in a language, and in an arena that I knew nothing about a few weeks prior. It was a very different year, but I got through it.”

As Betty began to endure the effects of her illness and treatments, she embraced her journey with a sense of quiet dignity and hopefulness, focusing not on her hardships but rather on her fortunes.  Through the surgeries, treatments, and emotional toil, she would preserver with a sense of optimism that is beyond inspiration.   “I think the medical visits that year went into the triple digits, and I stopped counting the needle pricks too. I got by with only four surgeries and had no surgical complications.  I was lucky.”

Each person’s fight against breast cancer is unique, as is the support structure that helps them along the way.  Betty would begin her journey with an ally by her side, a woman who herself understood the struggle that Betty was facing.  “I have a dear friend and 34 year breast cancer survivor who came down to Savannah and stayed with me through my mastectomy and initial healing. There could not have been a better person to be with me – a hero.”

The same way that a golfer approaches a challenging course with a sense of strategy and purpose, Betty has made it her goal to own her experiences and interactions.  “I think the lesson I learned here is, in addition to the fact that going through the process really sucks, no doubt about it, is bringing along your ‘A- game.’”  Betty explains this process by describing how even to this day she approaches her appointments with patience and strives each time for a connection with her doctors that is genuine and personal.

While she was blessed to have family, friends, and a team of doctors for support along the way, there were also many times during her trials when it was just Betty, an unshakable determination, and a journal by her side.  “Being alone dealing with breast cancer is something that I had to do. I suspect there are many of us who have faced this journey alone…”

The story of a survivor is in many cases the story of the many balances that they learn along the way.  For Betty, there was a balance between summoning her inner-strength from those moments of solitude, but also channeling her experiences to connect with others in a way that was meaningful and, in many ways, life-changing.

“I was a single person, living by myself in a new state and new city. Waking up in the middle of the night with no one to talk to was hard.  I turned to the Internet and became friends with a bunch of women bloggers all over the world that were going through similar processes.  I have bunches of friends I would have never met, that come from different circles, have different lives; and had we not shared a cancer journey together  we would never have met. That has been a real gift to me. They are special.”

For a survivor, the story never truly ends.  On this journey, there is not so much a destination as there is an ongoing cycle of change.  The courage that each person relies on to survive does not simply fade away like a candle left in a warm Georgia breeze.  Rather it builds stronger, growing into a passion that they will carry with them forever.   It leads many of them to reach out to help others who face their familiar challenges.  For Betty, she has embraced the power to connect to support others fighting breast cancer through social media blogs and local organizations like Susan G. Komen.

“All of a sudden, you finish treatment, and then what? Life needed to move forward, but there was little directional guidance available, but fortunately now that is changing.  Social media has made virtual support groups available, and I have joined a few and have stayed in communication with many of my blogging friends. While it has been 5 years, I’m still fragile from the experience and rely on my networks. A day doesn’t go by that something doesn’t remind me that I’m a breast cancer survivor.”