May 2014 Survivor of the Month 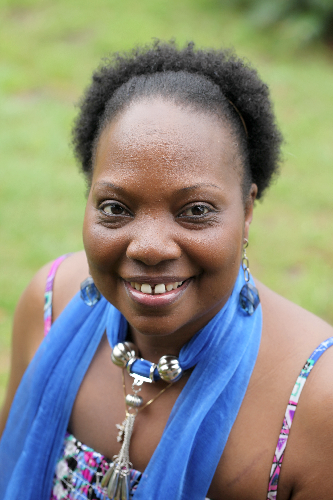 A Light of Hope

Sometimes the darkness can be blinding.  The burden that comes with a diagnosis of breast cancer can be heavy, and the emotions that it churns up can lead a person down a road that is dark and frightening.  But somewhere in the gloaming of despair and doubt, pain and frustration, a survivor finds a light of inner-strength that leads them through the shadows.  May’s Survivor of the Month, Jackie Brown, knows well about the gloom of a battle with cancer.  She knows about the resolve that it takes to accept the truth and face down one’s darkest fears.  But above all she knows of a courage that sleeps in the heart of a survivor that carries with it strength that can beam as brightly as the sunshine.

As a mother of four, a pediatric nurse, and a singer in her church’s gospel choir, Jackie’s life was full of pleasant routine and cancer was far from her thoughts.  “That was my life until my journey began.”  That journey would begin on June 18, 2012, when Jackie noticed a lump in her breast after working out on an elliptical machine.  Jackie did not panic, but rather called her doctor right away for advice.  After two weeks, new symptoms were beginning to appear and Jackie scheduled an appointment to follow up.

“My right breast (had become) hot, swollen and the knot had grown. I went to my doctor. He touched my breast and it was hot, like there was an infection. He gave me an antibiotic and he immediately sent me to have a mammogram.”  The results of that test would later reveal a golf ball sized mass in Jackie’s breast, and as she waited the three long days for the results to come back, her mind was full of difficult emotions.   “I went home thinking not of myself, but of my family….how could I tell them that I have breast cancer? How are they going to react to this awful news?”

A few days later, the phone rang and Jackie answered the call that she had feared the most.  “I just looked at the phone and thought to myself, ‘Dear God, I have CANCER.’  I sat down and thought, ‘How did this happen to me? I am a nurse. I have my mammogram every year since turning 40. My God, how could (this) happen to me?’”  A storm of different emotions, like the one gathering in Jackie’s mind, is common among those learning of their diagnosis.  Often one of the most difficult challenges for patients is to simply find the words to communicate the news to those closest to them.  But, through the dusk of disbelief, Jackie would find strength and when she began to question her circumstance, she would rely on faith to light her way forward.  “God sent and angel that replied, ‘You will be fine.’ At that point I knew I would be okay.”

As Jackie’s doctor made plans to begin treatment two weeks out, deep down she felt that was not soon enough.  “Something in my heart said, ‘No, I need a doctor now.’  So with the help of a wonderful friend, (we) got an appointment with (a different doctor).  That decision may have saved my life. My tumor was aggressive, growing at an alarming rate.”  Jackie’s decision to listen to her body’s warning illustrates an intuition shared by countless others who credit their survival to listening to this “sixth sense.”  It is an excellent example of how important it can be for a patient to be aware of their bodies and become their own strongest advocate.

The battle ahead for Jackie would be even more daunting than she originally thought, as soon she would find out that her cancer was not only incredibly aggressive but had already spread to her lymph nodes.  Jackie’s fight would be difficult, full of set-backs and steps forward.  She would endure 33 rounds of radiation treatment, a double mastectomy, chemotherapy, and a laundry list of side effects that could make one cringe.  Jackie would lean on her family, doctors and friends to get her through the toughest times.  “I was fried like a French fry after radiation, (but) ask me if how I feel now. I feel blessed. I alive and I am here… Every time I woke up my loving husband was by my side. I was never alone…someone was always with me. God blessed me so much, he placed the right people in my path to get me through.”

Jackie has also found support through her ability to connect with other patients and survivors through Susan G Komen.  “Komen introduced me to so many wonderful women that are like me. They know my pains, they can relate to my story. I am able to celebrate life with these ladies and encourage them with my story of survival.”

The message that Jackie hopes to pass on to others who may share her battle in the future is one of hope and inspiration.  She encourages women to take a proactive approach to their healthcare to promote early detection, and above all to never give up.  Her story is one of faith and perseverance, one that she hopes will be a beacon for who need it when times are bleak.

“Learn to live each day as if it was your last… enjoy the ones that love you and let them know that you love them as well. My journey was dark sometimes (but) I had so many people stand beside me to light the way through the darkness. God is using me as light of hope for others that are going through difficult situations.  My name is Jacqueline Brown and I am a warrior. I am a survivor.”