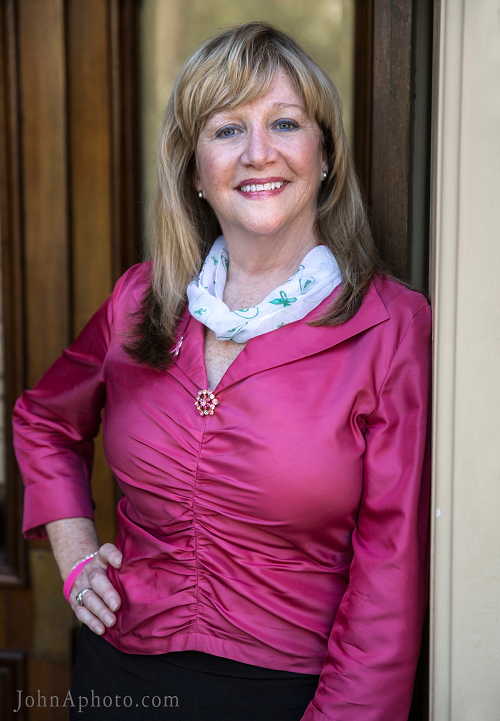 “This walk became my deliverance!”

For the lucky ones among us, bad news is an infrequent visitor that comes without warning but leaves as quickly as it arrives.  For others, like March’s Survivor of the Month, Pam Cowart, tragedy arrives like the familiar refrain to a song that she had heard many times before.  The story of Pam’s fight against breast cancer is a difficult one to tell, as it begins many years before her diagnosis.  It is a story of an anguish that can only come by losing five family members to this terrible illness, and the story of the mettle that it takes to turn that pain into positive source of inspiration.  It is the story of the tribulations that many survivors must endure, and the story of an unending hope that has driven one woman to make a lasting impact in the fight against breast cancer.  But above all, it is a story of courage.

“My journey with breast cancer began when I was 14 years old… (I was) a freshman in high school (when) my mother was diagnosed with breast cancer. She died when I was 17 years old, right after my high school graduation.”  The tragedy of losing such an important person at such an early age would be a crippling loss for anyone to endure.  For Pam, however, it was only the first in a string of heart-wrenching losses that she would have to suffer at the hands of this terrible disease.  “The next few years were inundated with family members being diagnosed and dying from breast cancer, my grandmother, aunts, and cousins.  I was overcome with grief.”

Pam knew that a family history of cancer can be a factor that increases a woman’s risk of getting the disease.  “Having such a strong family history of breast cancer in my family, I was diligent about doing my monthly self- breast exams and yearly mammograms.”  It was during one of these routine exams in 2002, more than three decades after her mother was diagnosed, that Pam heard the news that she had feared most.  “…my mammogram looked suspicious, and after having a biopsy the frightening news came back… Stage 2B BREAST CANCER!  I was in shock, scared, overwhelmed, devastated, and numb.”

It is common that the fight against cancer carries with it a gnashing coil of conflicting experiences; one minute there is fear and the next there is disbelief, one moment rage and another redemption.  Yet in this maelstrom of thoughts and emotions, Pam dug deep inside to find the courage and toughness that binds survivors together forever.  “I suppose I could sit around and throw myself a pity party, but what good would that do?”  Given her family medical history, Pam decided to take an aggressive approach to her treatment, and opted to have a bilateral mastectomy.  To say that Pam’s fight was difficult is to understate, but sometimes there are simply no words to describe the courage that it takes to endure nine months of chemotherapy and 36 separate radiation treatments.

A critical milestone on the journey to recovery is often finding a way to connect and move forward.  Faith, family, and friends are common places where survivors turn for support.  This was no different for Pam.  During times of frustration or toil, Pam learned to lean on those closest to her, particularly her two daughters, for support.  Pam, like many others, has also found support in the connections that she has made with Susan G. Komen.  “In 2005, 3 years after my bilateral mastectomy and recovery, my life took a dramatic change.  I decided to walk the Susan G. Komen 3-Day Atlanta walk. It was a walk for my family and friends who had traveled the path before me and those traveling the path with me.  This walk became my deliverance!”  Pam has gone on to lead a team in each year of Coastal Georgia Komen’s existence, and this year “Team Pam” will walk in its sixth Race for the Cure.

It is often the case that in the moments of greatest desperation a person realizes their greatest strengths.  This was certainly the case for Pam, as she sought to find purpose in her predicament.  “I knew I needed to take charge and make my experience with this devastating disease meaningful. Most importantly, through my own personal struggles, I became involved in making a difference as a breast cancer advocate.”

Since her diagnosis, Pam has channeled the hardships of her journey into a passion that drives her to this day.  The impact that she has had on the Coastal Georgia community, like Pam herself, has been nothing short of inspiring.  “As a founding member of the Susan G. Komen Coastal Georgia Affiliate, I (have) served on the Board the first 6 years of its existence.  I embraced the role of being a proactive advocate to lobby elected officials in Washington, D.C. and Atlanta about the importance of early detection, access to care, nurse navigators, and research.”  In addition to this outreach, Pam also served as the Survivor Co-Chair for the race in Savannah for two years and was recognized with the New Balance Survivor/Volunteer award for her work with survivors.

While Pam’s passion is an ongoing journey to find a cure, the path ahead of her is illuminated by a simple wish.  “My hope and prayer is that breast cancer will be eradicated so that my daughters and granddaughter never have to hear the words ‘you have breast cancer!’”