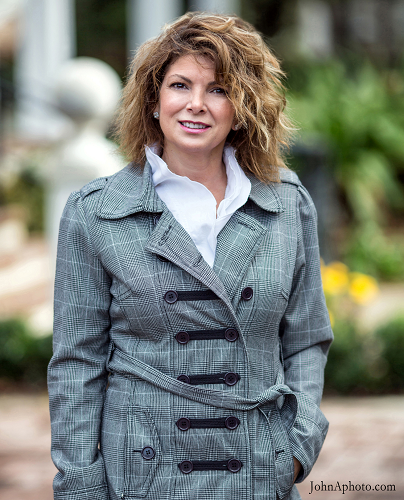 An Island for Hope

Nestled in the warm salty waters that ebb near the Georgia-Florida border, sits a small town called St. Simon’s Island.  Six years ago this quaint coastal hamlet was not only the place that January’s Survivor of the Month, Julie Grimm, called home, but it would also become an inspiring symbol of her deepest strength and the courageous battle that she would fight against breast cancer.

“In 2007, I was a single mom, 38, healthy, fit, and enjoying my life with my sons, 5 and 7, in a quiet beach community… life was good.”  But as fate sometimes dictates, Julie’s life would change forever in an instant that was most unexpected.  “One day I accidently hit my breast while cleaning house and I nearly blacked out because of the pain.  I had never felt such an experience before.”

Too often victims of breast cancer overlook critical warning signs that might allow for early detection of the disease.  It is a mistake that complicates the treatments of many patients, and fortunately one that Julie did not make.   “I think you must always listen to that voice looking out for you.”  Julie trusted her instincts and made an appointment with her doctor shortly after the incident.  It was during that first meeting that Julie realized that she would soon come to regard many things in her life from a different perspective, including the friendly isle where she had laid her roots.   “From the moment I had my mammogram, my life was dramatically different.  The doctor believed an area in my breast was cancerous. It went from a routine mammo to an ultrasound and biopsy within hours.   Now I felt like a woman on an island, on an island.  My fears were confirmed just a few days later.”

A great leader once mused that courage is not the absence of fear, but rather the ability to conquer it.  It was with this spirit that Julie weathered the devastation of her diagnosis and fought back against the disease with ferocious passion.  “After the angry tears stopped flowing, I set out a plan of attack.  Armed with friends and family flying in to help me, and my Dream Team of doctors, we began to tackle the breast cancer step by step.”  The next eleven months of Julie’s life would be marked by a barrage of grueling treatments and doctor visits.  All told, she would endure five surgeries, eight rounds of chemotherapy, and 36 separate radiation treatments.

In hopes of better understanding what she should do next, Julie sought out resources to help her on her journey.  However, she soon realized that even that would be a challenge.  As she struggled to find a book or manual that would help her with her day-to-day routine, Julie decided that if she could not find the right resource, she would help to create one for others who would follow in her footsteps.  She teamed with a local photographer to chronicle her battle with breast cancer in a journal that she would later publish.  “This journey (that) I never signed up for taught me to just ‘be me,’ and (I thought) these images just might help someone who’s diagnosed after me.  I self-published Seeking Clear Margins in 2008, just a year after my diagnosis, in hopes to show a visual perspective of my fight.”

Many survivors of cancer have noted that some of the most difficult challenges come not from the physical toll of the disease and its treatments, but rather the emotional grind of such a prolonged fight.  Julie was determined to never give up, and attributes much of her courage to the support that she received along the way.  “I was hardly ever alone and was constantly surrounded by love, care, laughter, tenderness, and concern.”

In 2008, after hearing about the annual Race for the Cure, Julie would also find new connections through Susan G Komen.  “I wanted to prove to myself that I could still run a 5k… I had no idea that I was entering into a sea of unconditional sisterhood.  The moment I picked up my number and race shirt, I knew that I was no ‘number.’  This was a cause that I wanted to be part of.”  Julie would soon become a member of the Komen board, where she has had immeasurable impact in the Savannah and Golden Isles communities for the past four years.  “I (have been) thrilled to be part of an organization that offers breast education, free or reduced mammograms to the uninsured or underinsured, and incomparable sisterhood.”

Throughout time and literature an island has often come to stand as a metaphor for isolation, solitude, and despair.  While the journey of most cancer survivors has glimpses of this darkness, Julie’s story has come to give new perspective to the symbol.  “All our journeys take some road.  Mine showed me that I am surrounded not by water but by love.”