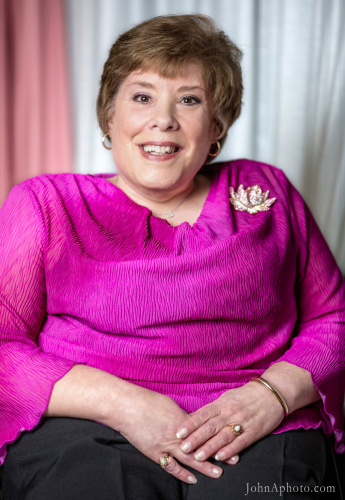 “It was not supposed to be me.”

It has been said that retirement offers us a canvas on which to capture a renaissance of the soul.  It marks a time when one volume in the almanac of a person’s life is closed and a new one is to be opened.  However for February’s Survivor of the Month, Marsha Hoilman, the transition was more about cherishing simpler things in life.  “I retired from a teaching career in June of 2003. Upon retirement my only ‘wish’ was the freedom to go shopping on a Tuesday, or to meet someone for lunch any day of the work week.  Simple wishes. But life had different plans for me—at least for a while.”

The journey of a patient with breast cancer is a crucible of many conflicting experiences and emotions.  Marsha’s journey began with a feeling that is common among those diagnosed with this terrible disease- shock.  “My breast cancer journey was a ‘mistake.’ It was not supposed to be me! You see, my mother and sister both have a history of troublesome mammograms. Me? From the very first one in my mid-thirties, until ten years ago, I never had a problem with mine. Never.”

While it is true that growing older increases your risk of breast cancer, it is a myth that breast cancer only occurs in women over 40, as Marsha can attest to. This was a reality with which Marsha would soon come face to face, as she and her mother went for their routine mammograms just two months after she celebrated her retirement.  “We were waiting to receive the all clear when a doctor and the technician who took my films appeared at the doorway. His first words, ‘Which one of you is Marsha?’ were devastating to hear and for a few minutes impossible to absorb.”

The road that a cancer patient travels is long and unrelenting, and the initial emotional jolt of a diagnosis can be paralyzing.  For Marsha, and many others, coming to terms with her new reality was just the beginning of her fight.  “My first visit to my breast surgeon, Dr. Ray Rudolph, can only be described as a blur. He did his best to tell me the location of the patterned calcifications and explain the impending biopsy. However, because my heart was beating so loudly and I was fighting to keep a flood of tears at bay, very little of what he said was truly heard.”

There is an ebb and a flow to the marathon of a battle with breast cancer.  There are good days and bad.  There are times when a patient needs the comfort from those closest to them and times when it is best to be alone.  On her journey, Marsha would find the solace and strength she needed in the support she would receive from her family.  “They (her family) took over managing my brain, often leading me like a young child to the ‘next step’ throughout those days, plus allowing me the solitude and permission to feel my emotions. I firmly believe that doing so was instrumental in my healing.”  Marsha attributes much of the success of her treatment to the support that she received from those closest to her.  “And my friends… how wonderful they were to Mom and me! On days when she was exhausted from worry and being my caregiver, meals would magically appear. Or friendly visits would jostle me out of the doldrums. Support systems are so important!”

Marsha would go on to have mastectomy and a breast reconstruction.  Cancer-free, she tried as best as she could to settle back into her normal life.  Yet the specter of this horrible disease never fully leaves the heart of a survivor, and the regular mammograms that she would get each year would soon serve as more than just a reminder of the battle that she had once fought.  When Marsha received feedback from a 2007 mammogram that indicated the results were “probably benign,” she found herself at a familiar crossroads.  “After six months of trying to convince myself that I was fine, I requested an MRI. I had been taught to listen to ‘that little voice inside you’ from other life experiences. Thank goodness I did!”  The test would discover that Marsha had cancer in her other breast, this time more advanced this the previous one.

It was at that moment that Marsha demonstrated the spirit of a true fighter and an unwavering courage that would lead her into this next fight with the confidence that she would prevail.  She once again chose to have a mastectomy and reconstruction, and as her family and friends rallied to her side once more, she noticed that this time they seem to draw their own comfort from her strength.  “I knew the procedure and that gave me a sense of control.  In a strange way, this alleviated some, but certainly not all, of my fear.  And my improved composure seemed to help ease the worry felt by my family.”

At the time of Marsha’s fight against breast cancer, she was unaware of the resources that are available through Susan G Komen, but since has become a devoted supporter.  “When someone tells me about a breast cancer diagnosis, Komen is almost the first word out of my mouth.  Everyone I tell is always amazed of the scope and availability of services they provide. To have access to this fully-encompassing organization, with worldwide-reaching involvement, and know that they are merely a phone call or short car ride away, is a true blessing for anyone faced with a breast cancer diagnosis.”

It has been more than a decade since Marsha first longed to shop on a Tuesday morning or share a mid-week lunch with a dear friend.  In some ways, her victory over breast cancer has given her a rebirth that her retirement alone might not have.  In the advice that she passes along to others, she shows the sincerity and determination that sleeps quietly in the heart of every survivor.  “All of us must become good stewards of our own bodies. We need to pay attention when something doesn’t seem right and be diligent in getting recommended exams. If a problem arises, become knowledgeable so that you can partner with your medical team and other caregivers. And above all else, strive to maintain a positive attitude.”