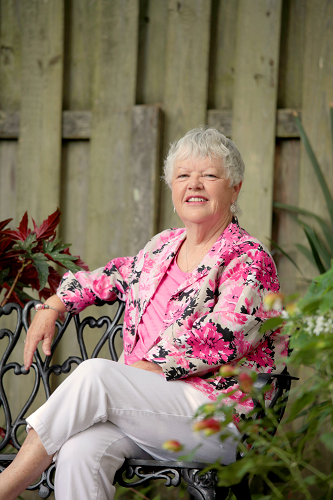 A Portrait of Perseverance

“Normal” is a sense of familiarity that guides each person’s life in a different way.  What one person finds to be typical can, to another, appear entirely extraordinarily. Normal is a concept that brings comfort, like a warm blanket, lending us a sense of what is safe and expected. But for some, like August’s Survivor of the Month, Janie Clay, the idea of what is normal can change dramatically when they expect it the least. For some people, “normal” will never again mean the same thing.

As the summer began to turn to autumn in 1975, cancer was a thought far from Janie’s mind.  “My life was relatively routine, working at Southern Bell repair department, raising two girls, school activities and church activities. My husband and I worked together to have a normal family life. We were young, just beginning to understand the challenges of family and raising two little girls.”  But life for Janie would soon take an unexpected turn, when she discovered a lump in her breast shortly after her 27th birthday.

“Within a few days, I was in to see a general surgeon and in the hospital for a biopsy procedure. The diagnosis was breast cancer. There was no discussion about surgical options or treatment alternatives; the recommended option was a modified radical mastectomy. In a matter of a week it seems, my life changed forever.”

Janie’s journey was an odyssey of adversity from nearly the very beginning.  Just four short months after having the mastectomy, she would learn that lumps had begun to develop in her other breast as well.  The realities of this new diagnosis were terrifying, and Janie feared the worst.  “I welcomed the New Year in 1976 in the hospital having a second radical mastectomy procedure to remove the breast cancer from my body. I knew that I was going to die and leave my daughters with no mother.”

A challenge that many patients face early in the battle with cancer is simply understanding what to expect and how to move forward.  “(With) two primary breast cancers four months apart at the age of 27, I look back on the experience and realize how uninformed and unprepared I was about cancer in general. I could not recall knowing anybody personally that had cancer. I had no one to talk to and there were few resources to go to for answers.”  Today, Susan G Komen of Coastal Georgia provides a number of services that offer help to many, like Janie, who need support throughout Coastal Georgia.  Providing breast health education and advocacy are two important ways that Komen seeks to give back, in addition to funding local programs for screenings, research, and survivorship support.

For Janie, her fight against cancer would not end with her second surgery, it would become a lifelong war that she continues to fight to this day.  Nearly two decades after her first diagnosis, Janie would once again hear terrible news.  “In 1994, almost twenty years after my first breast cancer diagnosis, cancer invaded my life again. I was diagnosed with pancreatic cancer and a new journey began for me. This time I underwent aggressive chemotherapy treatment and faced the uncertainty of an incurable cancer. I had proven that I could be a survivor; through the grace of God I have survived this cancer as well.”

The fight against cancer has been a part of not only Janie’s life, but for her entire family.  Several years ago, Janie learned that she carries a genetic mutation that increases the risks of developing certain types of cancer.  Despite the many physical and emotional tolls that she has personally endured, the most difficult pain for her to bear was the loss of her daughter, Amy, to ovarian cancer in 2000.  “My journey has not been mine alone. It has been a family journey. It has been a community journey.  We feel like we are a family of survivors; the hardest thing to survive was losing a daughter to cancer.”

During her battles, Janie would discover the critical role that survivors play in helping others who face the challenges of a fight against cancer.  Without a close friend or family member from whom to draw advice, Janie would turn to a co-worker who was herself a breast cancer survivor.  Through her first experience with breast cancer, she would learn that often the best medicine is strong support from someone who understands.  “Strangely, I did not undergo radiation or chemotherapy treatments for my cancer. What I did get was inspiration from a survivor.”   The relationship that she would build would eventually inspire her to invest her own time to give back, serving for years with the Reach to Recovery program in addition to serving as a steadfast administrative and race volunteer for Susan G. Komen Coastal Georgia.

To this day, Janie continues to fight on despite years of frustration and setbacks.  She is currently receiving treatment for a recurrence of the cancer that emerged in 1994.  Despite this, she remains determined to win her fight and serve as a source of inspiration for all.

The fight against cancer brings with it burdens of many different sorts, all of which Janie has become familiar.  Yet no matter what sufferings come with this terrible disease, a survivor finds a way to endure.  A survivor finds the courage to keep fighting no matter what.  It is a task that is easier said than done, especially when faced with setbacks and devastating hardship.  It is a rare courage that Janie embodies, a toughness, clothed in dignity, which is more easily marveled than understood.  Despite tragedies that would have led many others to give in, Janie is determined not only to survive, but to pass on the same sort of inspiration to others that she drew from a survivor many years ago.  “Surviving requires embracing hope, having faith, and believing in yourself. To survive you have to choose life and push ahead, but you have to do it one step at the time.”