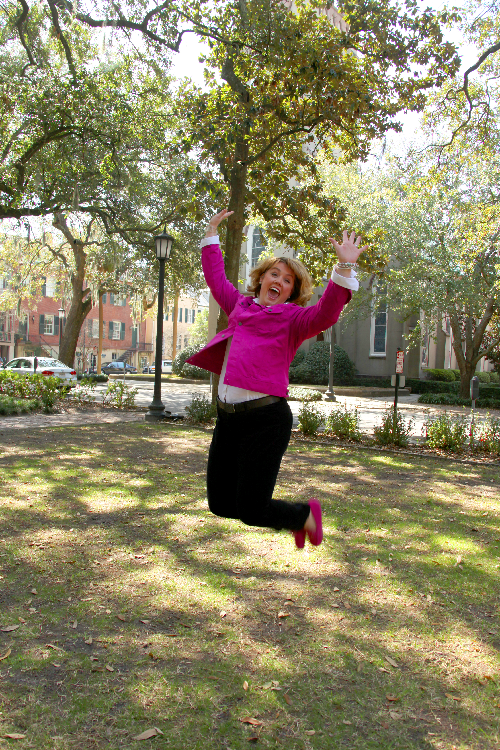 Like a clap of thunder and a bolt of rogue lightning on an otherwise cloudless day, sometimes moments happen in life that take us aback because they are both devastating and completely unexpected.  The storm that ventured into the life of April’s Survivor of the Month, Ginger Wilkins, was the diagnosis of a very aggressive form of breast cancer.  It was unexpected because she had no prior family history of cancer and at the time Ginger was only 32 years old.

More than a dozen years ago, as a mother of two, a wife and an artist, cancer was the furthest thing from Ginger’s mind.  However, this would soon change when her journey began with an unexpected discovery and gut feeling that would compel her to search for answers.  “Being conscious of (my) own body and its changes is how I found my lump.  I noticed a small knot under my left arm that was not there before… I went into the office the following day.”  For Ginger, and countless other survivors, instinct would prove to be an invaluable ally.  “Since I was only 32, no previous mammograms were available to refer back to.  My obstetrician truly thought it was a fibroid but requested that I have a mammogram and an ultrasound just to be sure.  I am so thankful that he did just that.”

After detecting an abnormality on the ultrasound, the doctor ordered a biopsy and Ginger waited to hear back with the results.  It was only a day after she and her husband celebrated their eighth wedding anniversary that Ginger got the news that would change her life forever.  The doctor’s call confirmed that not only was her test positive for cancer, but that it was an extremely aggressive form of the disease.  “I was told that if there is (such a thing as) good cancer (or) bad cancer, that I had the worst, and days would have made the difference in my survival.”

It is a common misconception that only women over forty or those with a family history are at risk of developing breast cancer.  Ginger’s story is a sobering reminder that men and women of all ages can become victims of this horrible illness, and it underlines the importance of routine self-exams at any age.  Like the journey of many survivors, her diagnosis is just where this story begins.

For an artist, one of many steps in completing a masterpiece is to find the right combination of colors to mix together to get the perfect shade for a painting.  In the same sense, the first trial for a cancer survivor is often simply understanding the mixture of emotions that come from hearing the unexpected news.  “I kept thinking to myself that this is all wrong.  (The doctors) were going to call me back and tell me this was all a mistake and my charts were confused with someone else’s.  Our son, Harrison, was only 20 months at the time.  (Our) daughter, Olivia, was just going into the first grade, and I was caring for an ailing father.  I didn’t have time to be sick.  Why me?”

The road that is traveled by a cancer patient has peaks and valleys, good times and bad.  Ginger’s journey, which included surgery followed by months of chemotherapy and radiation, was no different.   Ginger would learn to lean on those closest to her for support during her treatments.   “I was blessed with an amazing support team- my doctors…who rallied around me and made sure that I had the quickest and the best care possible, my family, and friends who cared for my family when I could not.”

Yet the inspiration of Ginger’s story is not found in the moments of darkness, but rather in the courage that it takes to emerge from those times with a sense of purpose that shines so brightly that others cannot help but notice.  With the good news of her recovery as a catalyst, Ginger along with her husband, Adam, seized the opportunity to pursue the life that they wanted.  In 2004, they opened their own trolley tour company in historic Savannah and would later use that company as a tool to give back.  “Realizing that life is too short and (it is important to) just conquer your dreams, we did just that.  We figured if we could beat cancer, we could do this.”

Since she won her battle with breast cancer, Ginger has made it a point to give back to the community and specifically others battling this terrible disease.  In addition to using her tour company to offer promotional fares to raise money for survivors, Ginger was also recently called upon by Coastal Georgia Susan G Komen to put her artistic talents to use when she was approached to paint a mural for breast cancer awareness.

Ginger’s painting, “Tree of Life,” still on display in the Oglethorpe Mall, depicts a massive oak tree stretching to the sky.  The tangles of Spanish moss dangling from the branches are reminiscent of thousands of small pink ribbons that have become synonymous with a fight that she knows all too well.  The trunk of the tree, which grows increasingly wider at its base, seems to convey a sense of fortitude and stability.  Perhaps it is a symbol of the strength that bonds survivors together forever, a strength that Ginger knows firsthand.

The message that Ginger’s story passes along to others who might later share her same fight is one of enduring hope and courage.  “I truly think that your faith and positive attitude are your best healers and can be your undying strength to fight hard and win!”