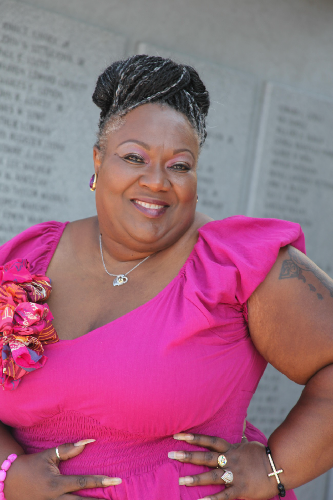 “Early detection saved my life, let it be the reason you are still here.”

Sometimes it is the treatments that you don’t receive that are the most important.  As a sixteen year survivor of breast cancer, October’s Survivor of the Month, Yolandra Shipp, knows this well.  Early detection is the most important factor to which Yolandra attributes her survival.  It was during a routine breast exam with her physician that Yolandra discovered a lump in her right breast.  Immediately she knew that from that moment on her world would be very different.

“I remember getting the results (of the biopsy); it was a Friday.  I was riding down I-40 West and the road rolled up to meet me.  I began to cry and I began to think of my daughter and the fact she would be left with no parents.  At the time, cancer of any form was considered a death sentence.”  Yolandra considers herself to be lucky however, as her cancer was discovered early enough that she required no chemotherapy or radiation treatments following her surgery.  “This journey has been simple compared to many others I have heard.  I was diagnosed in Stage 0/1 during the time when everything was done in one day and the patient was released to heal on your own at home.”

With early diagnosis and tremendous courage, her initial treatment was a resounding success, yet Yolandra knows that the specter of this terrible disease never leaves the mind of a survivor.  More than a decade after that fateful doctor’s appointment, Yolandra came face to face with her worst fears, as she once again discovered a suspicious lump.  Fortunately the results would come back as benign, but the feeling that she had dodged another bullet when others had not, would leave her with a burden that she would carry with her for years to come.  True character is often born from adversity, and Yolandra used this sense of duty to make a difference. “…for years I felt guilty as I heard the stories of others, because I felt as though I had missed something or I should be ashamed (when) compared to others.  Later I realized that was my platform to preach, and preach that early detection saves lives.”

Yolandra realizes that the demands of a career or motherhood too often put a woman’s personal needs on the back burner.  “Many women are scared, while others are too (busy) raising children, maintaining families, and working to take care of themselves.  Many times the right information and statistics are enough to make someone get a mammogram, providing the facts and directing the lost.”

Yolandra believes that one of the most important ways that she can help is to champion the effort to educate others about the dangers of breast cancer and the importance of regular screenings. “Breast health and awareness is crucial to survivor numbers.  Many times individuals, due to lack or inappropriate health insurance, do not have the resources or tools necessary to know where to go.”

Yolandra hopes that her story can be a message to inspire others to be proactive in ensuring their own health.  “Get yearly exams and do at-home breast exams monthly.  Do not be ashamed and share your stories.  The stories of others are inspirational.  Early detection saved my life, let it be the reason you are still here.”