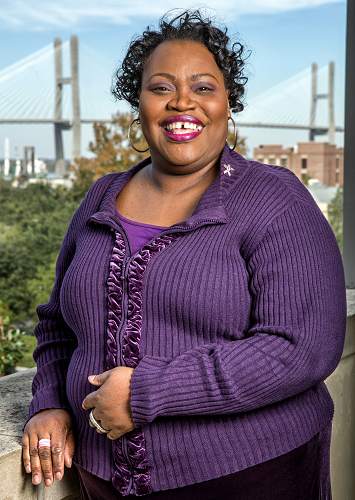 It is often in the darkest of moments that a person’s true nature shines through.  For December’s Survivor of the Month, Valerie Murchison, her character is defined by the spirit of a fighter and an unbreakable determination that has led her to victory in the face of daunting odds.  Valerie’s journey began long before the day that she received her diagnosis.  “Months before (the diagnosis) I was taking a shower and noticed a lump in my right breast.  I thought nothing of it.  I just thought that it was fibrositis (which) I had dealt with early in life, so I thought nothing of it.”  For Valerie, life went on.  She began to plan for an upcoming family vacation and later to care for her father who was gravely ill.  “I did not realize the signs of early cancer had started, I ignored them.  Cancer was far from my mind.”

Valerie’s story is a familiar one.  Often when cancer is not detected early, it is because the patient did not recognize or simply dismissed the initial warning signs.  “I told myself it was just a phase, go with the flow.”  But as time passed, Valerie’s symptoms began to grow worse.  “(There) was pain in my chest, (a) rash on my leg, and a pain in my left leg that would sometimes (force) my leg to give out, where I couldn’t walk from the driveway to the house.”  Despite the growing discomforts, Valerie still did not realize the seriousness of her illness and tried her best to tough through the pains.  “I didn’t tell anyone (about the symptoms) because I was really pushing for this family vacation… it was the first vacation that (our) family had been on, and I wanted my son to see me happy.”

With the family trip to Florida finally behind her, Valerie returned to her normal life; which now included frequent doses of medication for leg pains and lump in her breast that had not disappeared.  “I still felt the lump, it (had) not gone away.  I (started) to worry that something was really going on with me.  After talking to the nurse at my primary care office… she talked me into getting a breast exam.”

The surgery for a biopsy would later reveal not one lump, but three in Valerie’s breast.  Despite this fact, she remained optimistic and on the day she went in to hear the results was confident that she would be told that it was nothing serious.  “I knew in my heart it was nothing.  I was in good spirits… but the look on (the doctor’s) face…she didn’t crack a smile.  She held my hand and told it me was cancer.”  The feelings that a patient goes through when hearing such a diagnosis run along a wide ranging emotional spectrum.  Valerie experienced nearly all of the reactions at once.  “My first response was to look at her and tell her that she was a liar… I lost it and my husband had to pick me up off the floor.  My life went down (like) a sparrow in a matter of seconds.”  The doctor would then explain to Valerie that she would need a mastectomy as well as radiation and chemotherapy to fight the disease, but Valerie was too deep in a fog of emotions to process what was happening.  “After that, everything was a blur to me…my whole world had stopped.  I blamed God and asked him whatever I did to forgive me and take this away.  I could not understand that six months (before) I had a mammogram and it was okay, now I have full-blown cancer…how the hell did this happen?  That was the day that my whole world went dark and cold.”

The despair that overwhelmed Valerie in that appointment would soon give way and the spirit of a fighter would quickly take its place.  She would emerge from the barrage of treatments and surgeries with a sense of optimism and good humor that are the pillars of her vibrant personality.  Valerie attributes support that she received from other survivors as well as educational classes as critical pieces in the success of her treatments.  She encourages others battling cancer to take a proactive approach to their health.  As Valerie continues her journey, she seems determined to live her life by a mantra of determination that many survivors share.  “I must end this story by saying that I thank God for giving me a second chance in life.  I will live, I shall not die.”