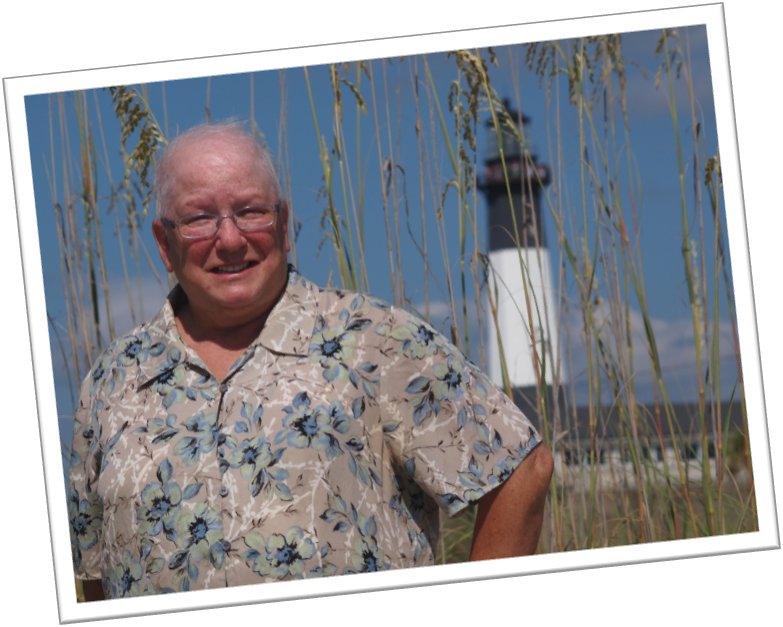 “Every Encounter is a Treasure”

Wendy Brewer wanted to have her photo taken on Tybee, which is always fun. She insisted that the lighthouse be in the photo though, because she is somewhat of a lighthouse enthusiast! She was wearing a hat sporting lighthouse pins and said that if she wasn’t tired from her chemo treatments we may very well be going to the top for the photos! Well, she might, but I would prefer to stay on the ground!

Anyway, on to serious things, in December, 2007 she was diagnosed with breast cancer.  In January 2008, she had a mastectomy and all of her lymph nodes removed.  “I underwent chemotherapy, radiation treatments, reconstructive surgery, and physical therapy.  Some days I was so weak I couldn’t (didn’t want to) get out of bed.   All the while I knew I was lucky.  I’m right-handed and everything was done to the left side of my body.   I was with family who loved and cared for me.  I had faith in my doctors.  I used my time wisely and in such a way that I was able to maintain the illusion that I was in control of my life,” Wendy says.   On days that she couldn’t get out of bed she concentrated on her passion:  lighthouses.  “I wrote about them, researched them, and cataloged photographs.  The 18 months before my diagnosis I traveled throughout coastal America to visit and photograph over 450 lighthouses.  I had the time of my life but now I was not only trying to survive, I needed to thrive as well.  Like the lighthouses that guided sailors safely to shore during storms, writing about these same lighthouses guided me out of my storm (cancer) and back into the safety of the shore (life).   I published my book, Keep Your Glow On, in April 2011,” she says of her achievement.   Later in 2011, her cancer returned as metastatic breast cancer in her thigh bone.  Within months it was wiped out with radiation.  In 2012 metastatic breast cancer returned in five places in her spine.  She completed chemotherapy in May of this year, will have a PET scan in late June and will find out whether or not the cancer is gone in July.    “My current plan is to continue to stay active, do what I love, and thrive every step of the way,” Wendy says optimistically.

Wendy used the valuable, on-line Susan G. Komen for the Cure resources to learn more about metastatic breast cancer.  The website has a wealth of information available to everyone, whether they are patients or family members (or friends) of patients who want to learn more. “In 2009, my daughter organized a team for the Cincinnati Susan G. Komen Race for the Cure.  I finished the race and was emotionally overwhelmed by their wonderful survivor’s celebration.  In 2012, I organized the mighty “Glow” team for Savannah’s Susan G. Komen Race for the Cure.  Although we brought up the rear, everyone on Glow finished the race (I was in active chemotherapy treatments at the time and it was a huge accomplishment for me) with cheering and encouraging along the way from great supporters such as Dr. Paula DeNitto, the Cancer-Free Fairy (Elizabeth Henson Meyers), and hundreds of other volunteers,” she says proudly of her team which was one of the top fundraisers this year!

“When I didn’t think about the end of my life, I took things for granted.  I want people to know that although cancer is scary it can also give you a better sense of life and help you realize what’s really important.  Every day is precious and every encounter is a treasure,”  she says about how valuable surviving and being alive is.

As an advocated, Wendy is stellar. “By participating in the Race for the Cure, I’ve helped raise awareness and money to find a cure.  The “Glow” team ended up in 5th place raising money for the Coastal Georgia Chapter of Race for the Cure. ”  She also helped the Tybee Island Historical Society become an active advocate for breast cancer awareness.  On October 27, 2012  the Tybee Island Lighthouse will host (for the second year) “Every Step Counts” walk and climb.  Representatives from many cancer organizations will be there including:  Susan G. Komen for the Cure, Young Survivors Coalition, Every Step Counts, Guardians of the Ribbon, the SCARF Project, and others.   The event helps raise awareness for breast cancer patients (and their families and friends) as well as supporting a survivor’s network.

Wendy, keep that beacon of hope shining for us all!