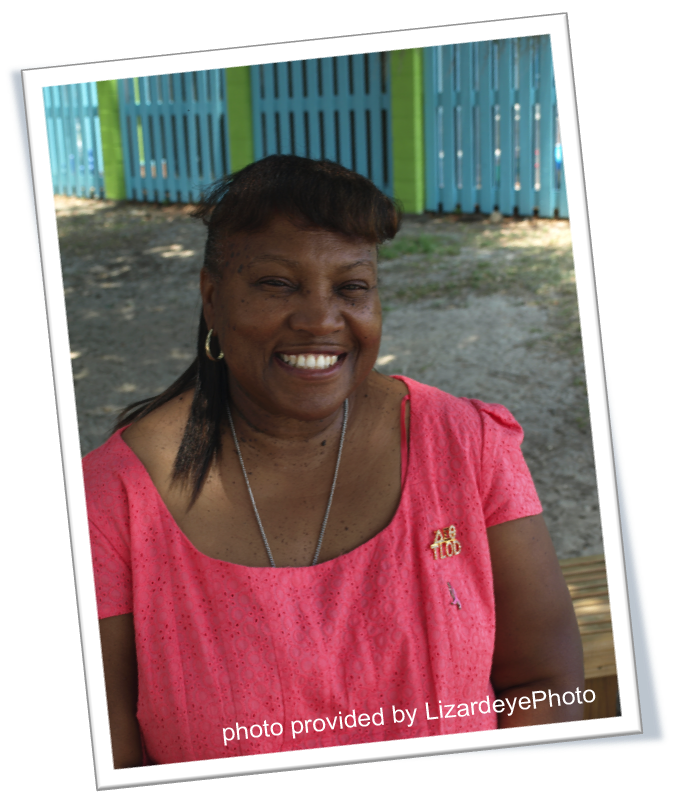 Wow, Carolyn Stanley! What a lady she is! She chose to meet at the YMCA on May St. where she spends a lot of her time volunteering and meeting with some of the groups she’s involved with. She met me wearing a bright pink dress and quickly whisked me into the air conditioning inside of the Y. Carolyn eagerly showed off the building, explaining that when she moved here it was in dire need of a make-over and how some of the groups she is involved with as well as other groups got together and made it a great place to be! We chatted for a while and the only mention of breast cancer was how she is a member of Top Ladies of Distinction, Inc., as the Status of Women Thrust which deals with women’s health issues.

Carolyn is a 16 year breast cancer survivor, which may be why she didn’t jump right into her cancer story when I met her. Sixteen years is a long while and she’s clearly got great things on her mind these days. Though, breast cancer is high on her list of priorities in all that she does.

She says, “I was diagnosed with Breast Cancer on Friday, December 1, 1995 in Cincinnati, Ohio. It was after the funeral of my husband who died on November 26, 1995. He had a heart attack and a stroke during the by-pass surgery in October. I had been at the hospital everyday and the week before he died I had taken my mammogram. My doctor was my Sorority sister. She had come to the house after the funeral and told me that she had waited all week until the services were over to tell me that I had Breast Cancer and that I needed to get to a surgeon immediately. I had a Lumpectomy and my Lymph Nodes were removed. I suffer from Lymphodema to this day.”

“I had radiation and chemotherapy because my sister died in 1981 with Breast Cancer at age 27 so my treatment was more aggressive. I had two children one who was in college and the other in the 9th grade. It was with love of God and the help of my sister, family, church members, and friends that I made it through 1995-1996. I was a Math Teacher and through it all I went to work and shared my story with my students and staff. Many times after radiation one of my students had to write for me on the board and collect papers; they did it with love. In July of 1996, had another surgery because of an abscess in the area where my lymph nodes were removed. In 1998, I began taking Tamoxifen for the next 5 years. I was released from my Oncologist in 2006. I moved to Savannah with my daughter in 2007. I have a mammogram every year and changed my eating habits.”

How has Susan G. Komen for the Cure impacted her life? Carolyn learned about Susan G. Komen for the Cure from the Breast Cancer Group that she belonged to in Cincinnati, Ohio. Her students and sorority sisters thought it would be good to walk in the race. Even though she was totally out of shape, they started walking. Everyday someone walked with her until she could walk 5 miles. They walked in the Cincinnati Race and finished in good time.

“I participated from then on. I had a team of students and friends and it was an annual event. When I moved to Savannah, I participated in the first walk and walked with “Ruby’s Team”. I have walked every year with Top Ladies of Distinction, Inc. and Top Teens of America. I had the opportunity to walk with Dr. Bertice Berry the past two years. As a member of Top Ladies of Distinction, Inc., I serve as the Status of Women Thrust which deals with women’s health issues. We make annual donations to Susan G. Komen for the Cure and sponsor members and teens to participate in the race. I also participated in the “Pink Sunday” Program for my church, Thankful Missionary Baptist Church and recognize church members who are survivors. Susan G. Komen for the Cure has allowed me to have a platform to inform many minority women about the seriousness of Breast Cancer  as it relates to African American Women and the need to get mammograms and get care from the doctor,” Carolyn says of her experiences.

The message that she would like people to understand about breast cancer is that it can be survived if treated early. Everyone must get checked by your doctor, do self – breast checks regularly and have an annual mammogram.

Joining a Breast Cancer Group, if diagnosed, with your family is helpful and gives you a group of people who really understand what you are going through.

She belongs to church and community service organizations. These organizations give her an opportunity to reach a wider group of people and members of different communities to spread the word about breast cancer and the services of the Susan G. Komen for the Cure. “I feel that because I am a survivor, I have a duty to help someone to survive as I have for 16 years. Whatever I can do to encourage a new survivor is what I am dedicated to do,” great words from a truly outstanding lady!