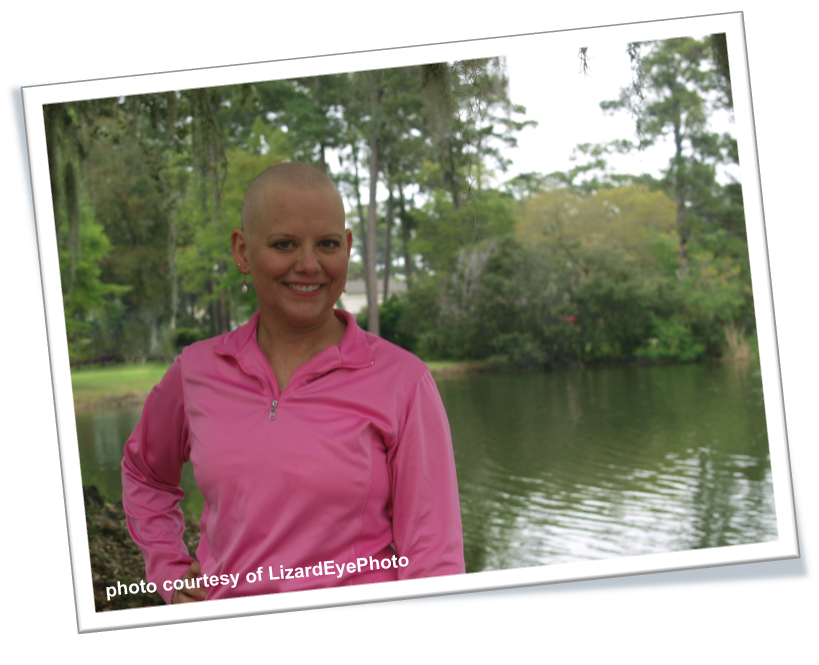 Jenny Sheppard is a lovely and vibrant woman with a big smile and a beaming, positive attitude which you can see first thing when you meet her. First diagnosed at age 37, she is one of the founders of the Savannah Affiliate of the Young Survival Coalition, a group that focuses on younger women who are diagnosed with breast cancer. She says that younger women may face different obstacles while fighting cancer, such as raising children, early menopause, maintaining their careers and  frequently, more aggressive disease. The group also is trying to promote awareness that younger women do get breast cancer as well.

She was first diagnosed in May of 2006, “I was getting mammograms annually due to a strong family history, and had just had a clear mammogram on March 29th.  Two weeks later, I found the lump in the shower.   I learned that unfortunately, mammograms are not very reliable for women under 40.” Jenny’s  OB/GYN sent her back to Telfair for a recheck, where they decided to do an ultrasound, followed by a biopsy and eventually a diagnosis of stage IIA estrogen positive breast cancer. She opted for a double mastectomy and reconstruction, then 6 rounds of chemo and 34 radiation treatments.   It was very challenging dealing with the treatments while working and raising two young girls who were 3 and 7 at the time, but we stayed positive and came out the other side as a stronger family.

Now, 4.5 years after her initial diagnosis, Jenny is facing breast cancer again.  She found a tiny spot under the skin near the site of the original tumor and biopsy in December 2010.  The biopsy revealed it was the same type of breast cancer as before and is considered a local recurrence and not metastatic disease. She’s being treated with radiation and chemo therapy (both oral and IV).  Jenny and her family remain optimistic and look forward to the day we can start counting the cancer free days again.

When asked about how the Susan G. Komen Coastal Savannah Affiliate has helped her through her cancer journey, she has nothing but kind words to say: “The Komen website provided a great deal of information when I was initially diagnosed.  As Lance Armstrong says, knowledge is power and I devoured every bit of information I could find to better educate myself about my personal disease.  The local affiliate has also played a role in my journey as I have met so many wonderful and supportive people and they have been very helpful in launching the Young Survival  Coalition here as a important part of our local breast cancer community.  I ran my first Race for the Cure in Charleston in 2007 and found it to be a wonderful event and it served as a physical challenge for me to prove to myself that I am healthy and strong.  When we got our own race in Savannah in 2009, the YSC group participated in large numbers, giving us the opportunity to show our strength as a team and individually.  I have been able to improve my running time each year, finishing in the top 20 survivors in 2009.  This year I am just hoping to be able to walk the race, if the side effects of the oral chemo will allow me to go that far on my feet.  If not, I will stand (or sit) proudly and cheer on my fellow survivors and friends. ”

Jenny is a great advocate for breast cancer awareness because she believes everyone needs to look out for their own health and encourages people to do so. Especially with starting the Young Survival Coalition here in Savannah, she is helping to bring awareness to younger people who might not think they could be affected. She believes if you are diagnosed to educate yourself as much as possible about the disease and become and active participant in your treatment. She says, “It is also extremely  important that you find the support that you need to get through it – whether it is on line, through a support group, your church, or friends and family – don’t do it alone.  Also, for survivors and for caregivers, be aware that the period immediately following treatment is often the scariest.  When you stop actively fighting cancer and you realize in retrospect what you have just been through, it can be extremely difficult emotionally.  Know that it is completely normal and that the journey does not end when treatment ends. ”

Young women CAN and DO get breast cancer and there is no effective screening tool for young women.  We must be familiar with what is normal for our own breasts and notice when something changes.  Also, living a healthy and natural lifestyle are important parts of reducing your risk.